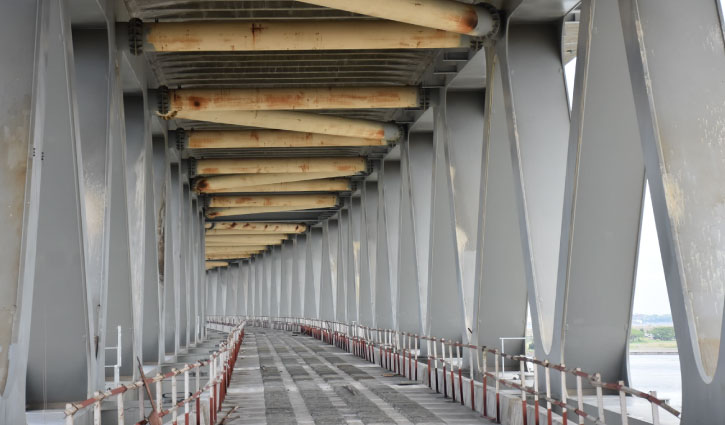 Train operations between Dhaka and Bhanga upazila of Faridpur district through the Padma Bridge are expected to begin at the end of 2024, an official of the railway ministry said.

Earlier, minister of railways Nurul Islam Sujan had said train operations between Dhaka and Bhanga would begin in March next year.

While inspecting the progress of the Padma Bridge Rail Link project in May at Louhajong upazilla of Munshiganj, Sujan had said "For now, a target has been set to operate trains from Dhaka to Faridpur's Bhanga junction on 26th March next year. If not possible, train operations will begin in June''.

The Dhaka-Bhanga rail service was supposed to be launched on the opening day of the Padma Bridge, but it was not possible, the minister said, adding that after the inauguration of the bridge, installation of railway tracks on the bridge will start in July.

According to the working paper of the Padma railway bridge, the landmark railway project is being implemented in 3 sections, namely, Dhaka-Mawa, Mawa-Bhanga, and Bhanga-Jashore, respectively.

Until June, some 59.50 percent of the physical works of the rail project were completed. About 80 percent work of the Mawa-Bhanga section has been completed as of June 6 and the rest will be completed by December, an official report said.

The progress of Dhaka-Mawa part stands at 60 percent and it will take one more year to complete the rest of the work. On the other hand, the progress of Bhanga-Jashore part is currently at 51 percent, according to an official report.

Once the project is fully implemented, a direct rail communication between Dhaka and the south-western regions of the country will be established, bringing Munshiganj, Shariatpur, Madaripur and Narail districts under a new rail network.

Moreover, another sub-route of Trans-Asian Railway Network from Dhaka to Kolkata via Jashore and Benapole can be launched, allowing operations of national and international freight and broad-gauge container train movement along this route.

The development project proforma of the project was approved by the Executive Committee of the National Economic Council on May 3, 2016 with an estimated cost of Tk 34,988.8 crore and the deadline for completion of the project was June 30th, 2022.

On May 22, 2018 the ECNEC had enhanced the project cost again taking the total cost to Tk 39,246.8 crore in the revised budget. The Chinese preferential buyers credit amounted to Tk 21,036.69 crore which came from China Export Import Bank. The ECNEC on the same day also extended its completion deadline by two more years to 2024.

According to the ministry, the total cost for Padma Multipurpose Bridge project was allocated at Tk 30,193.30 crore out of which only Tk 6,252.67 crore could be spent on railway constriction. The repayment of the loan could be made in 35 years. 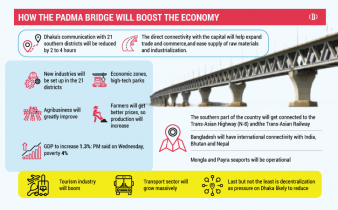