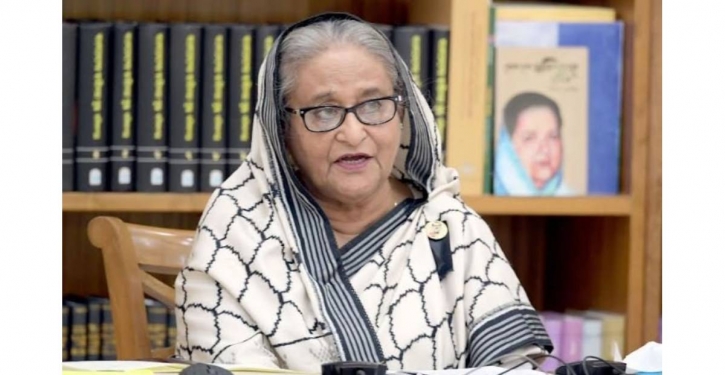 Prime Minister Sheikh Hasina on Sunday said not only the Bangladeshi women, but also the women of the entire world can follow the life of Bangamata Sheikh Fazilatunnesa Mujib.

“I think, not only the women of our country, but also many women of the world can follow the example of her (Bangamata Sheikh Fazilatunnesa Mujib) life,” she said.

The prime minister said Bangamata was a person who sacrificed everything of her life for the independence of the nation, for the country and its people.

She said this while addressing the opening ceremony of the two-day international conference titled “Bangamata: A Paragon of Women’s Leadership and Nation-Building in Bangladesh” at Senate Building Auditorium in Dhaka University as the chief guest.

Sheikh Hasina said the decision Bangamata gave about family and politics for the country was very much right — till the end she sacrificed her life.

“My mother sacrificed a lot. She had no demand in her life. She didn’t want anything for herself. We didn’t hear anything that she wanted for something of her own,” the premier said.

Highlighting Bangamata’s habit of living a simple life, she said, “Bangamata used to give away everything she had for the party, for the people, for the poor relatives.”

For this initiative, Sheikh Hasina extended her gratitude to the University of Dhaka as a member of this institution.

She said that she has tried to do everything possible for the welfare of the womenfolk.

Mentioning that her mother didn’t do her study formally, she said, “Bangamata had agony for not doing formal study and that is why she endeavoured to educate us and also emphasised women’s education so they could stand up.”

The prime minister said Bangamata showed immense courage standing beside the Father of the Nation Bangabandhu Sheikh Mujibur Rahman, and she didn’t see her mother to break down in any situation as she had strong confidence always.

She also highlighted the life-long struggle of Bangabandhu for the rights of the exploited and deprived people, saying that Bangamata always provided support to him in all issues.

Sheikh Hasina said the Pakistani occupation force picked them up and confined them in a one-story house at the then road no-18, now 9/A and house no-26.

“We had to live on the floor. There were no blankets. No curtain. There was nothing. We didn’t get any food for 24 hours. But, we’ve never seen that my mother had broken down,” she said.

She also said that Bangabandhu and Bangamata used to talk a lot about the independence of Bangladesh and the future of the country.

About the brutal killing of Bangabandhu along with most of his family members on August 15, 1975, she said, “Who are the killers? They used to visit our house. My mother used to give them food. But, they returned, becoming killers.”

The prime minister referred to the courage and sacrifice of Bangamata.

She said, “When my father was shot, my mother didn’t beg for her life. In this situation, people usually beg for lives. My mother didn’t that. Standing up boldly, mother told them as you kill him, kill me too. Then the killer’s bullet took her life away.”

She said that Bangamata was the main inspiration in all political movements and struggles of the Father of the Nation.

During Bangabandhu’s long political career, she said the great woman gave necessary inspiration and support in taking right decisions and continuing the movements for the cause of an independent nation.

In this regard, Sheikh Hasina mentioned that Bangamata played a very important role in many crucial moments of the nation in making decisions to forge movements during the Pakistani regime.

The prime minister pointed out the critical moments of differences in opinions among the senior leaders of the party on many occasions.

She reminisced that Bangamata had given the right suggestions to Bangabandhu at the right time.

When Bangabandhu remained in jail, the premier said Bangamata used to disseminate directives from Bangabandhu to the leaders and workers of Awami League for strengthening their movements and struggles.

Besides, the great lady also used to send information about the situation of the country to Bangabandhu, she added.

After the war of liberation, Sheikh Hasina said Begum Mujib played a significant role in rehabilitating the women and girls whose innocence was violated by the Pakistani forces during the war.

The prime minister also recalled the role of Dhaka University in every achievement of the political history of Bangladesh.