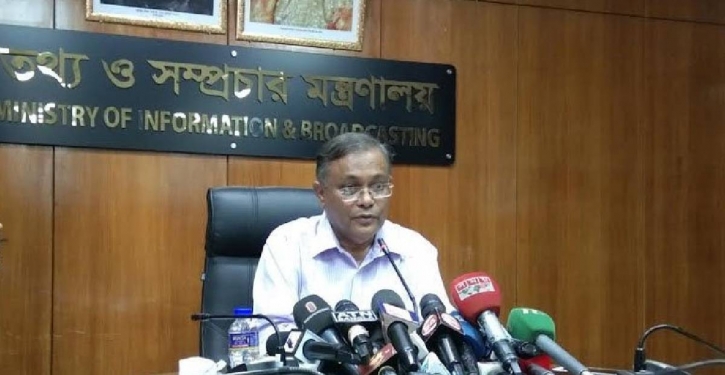 Information and Broadcasting Minister Dr Hasan Mahmud on Tuesday said BNP orchestrated the Bhola incident on July 31 as part of their design to create anarchy across the country.

“They (BNP opened fire on police and a policeman received injuries. Even the BNP leaders and activists abducted a police personnel at a local BNP office and beat him up. And the doctors, in a primary report, have claimed that the member of BNP’s associate body died from head injury. That means, he died due to a hit of bricks. The matter is under investigation and everything will be revealed in the enquiry,” he said.

BNP wants dead bodies for politics and the incident of Bhola was created for fulfilling this evil intention, Hasan told reporters at the meeting room of his ministry at Secretariat in the capital, reports Bangladesh Sangbad Sangstha.

He said, in fact, the politics of BNP is for creating instability in the country, spreading propaganda to create confusion among the masses and for this they lie continuously. These are the main principles of their politics, he added.

He said police fired teargas when they started vandalizing shops and throwing bricks on police. Even the BNP activists fired on police and beat up a policeman at their party office, said Hasan, also Awami League joint general secretary.

The minister said BNP secretary general Mirza Fakhrul Islam Alamgir is made provocative speech today. But, the leaders and activists of Awami League have not yet taken to the streets, he added.

The minister urged the AL leaders and activists to remain alert against all conspiracies and anarchy.

Replying to a query over ‘hartal’, Hasan said BNP called hartal in the past too, but no one responded to their call. The countrymen will resist them if they try to create any instability and do sabotage in the name of strike, he added.