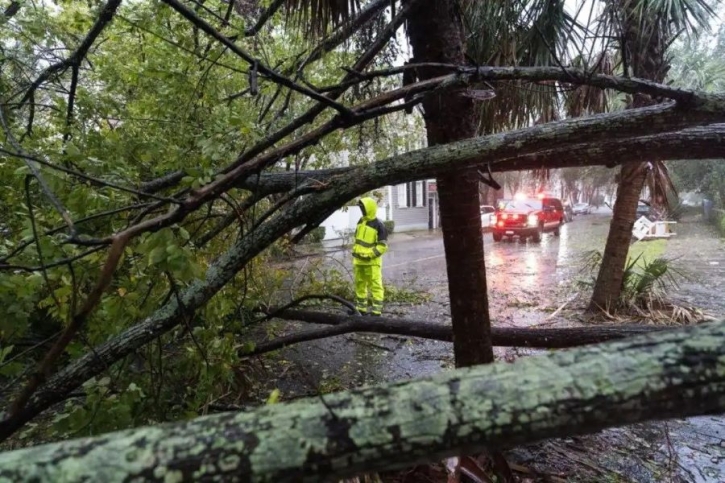 Post-Tropical Cyclone Ian is lashing South Carolina in its second US landfall after carving a swathe of deadly destruction across Florida.

Ian returned as a category one hurricane near Georgetown at 14:05 local time (18:05 GMT) on Friday before losing some power as it marched inland.

But the danger is not over. Flooding is projected to continue throughout the region, including in Florida, for days, reports BBC.

But a state medical examiner must determine if all the fatalities are directly related to the storm.

Ian was one of the strongest storms ever to hit the US when it struck Florida as a category four hurricane on Wednesday.

In coastal South Carolina, Ian has already ripped apart four piers and sent torrents of water flooding into neighbourhoods, including in the popular seaside city of Myrtle Beach.

Nearly 200,000 homes and businesses in South Carolina were without power by Friday evening.

In the city of Charleston, around 80 miles (130km) south of where the hurricane made landfall, cars were seen driving through flooded roads.

The storm is moving north with maximum sustained winds of around 70mph (110km/h), according to the National Hurricane Center (NHC).

Although Ian weakened on Friday, it is still dangerous, says the NHC.

The agency warns that central Florida could see record river flooding into next week.

There was also a chance that Ian could spawn tornados in North Carolina and Virginia as it marched north, according to the NHC.

Ian is expected to dissipate over either North Carolina or Virginia by late on Saturday.

The ruins of a petrol station in Fort MyersImage source, Reuters

Meanwhile, the full scope of the disaster in Florida - where 1.6 million people still have no electricity - is coming to light.

"We're just beginning to see the scale of that destruction," President Joe Biden said at the White House on Friday.

He said Ian was likely to be among the worst natural disasters in US history. The storm has caused $47bn (£42bn) in insured losses, according to research firm CoreLogic.

Hurricane Ian was much less damaging than category five Hurricane Katrina, which killed more than 1,800 people and wreaked $125bn in damage when it slammed into Louisiana in August 2005.

Fort Myers beach was one of the first places to encounter the power of Ian when it struck the Florida peninsula this week.

Two days on, shell-shocked residents like Pat and Kathleen Unger - who have an apartment close to the beach - are returning to their homes.

"It looks like three buildings standing in the middle of the Sahara Desert."

At what was once a small marina on the Caloosahatchee River in Fort Myers, about 30 boats have been destroyed.

Meanwhile, in Cuba - where Ian knocked out electricity for the entire island of 11 million people - residents in several neighbourhoods of the capital Havana have taken to the streets to bang pots in protest at a third day of blackouts.