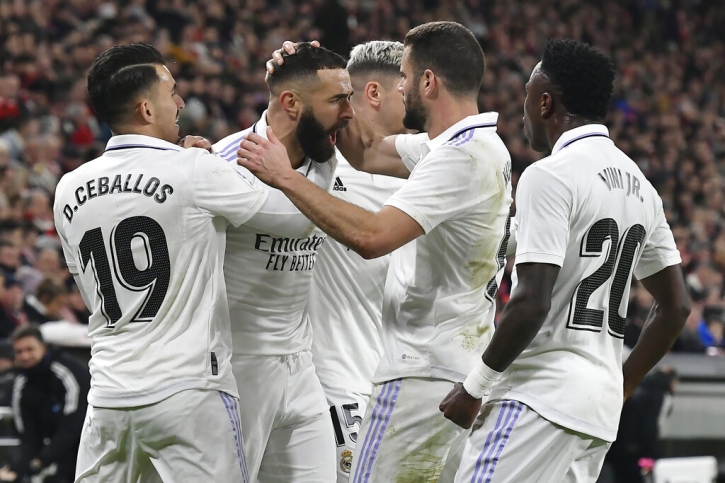 Goal after goal, Karim Benzema keeps putting his World Cup disappointment behind him.

Benzema scored for the sixth time after being dropped from France’s World Cup squad because of an injury, leading Real Madrid to a 2-0 win at Athletic Bilbao in the Spanish league on Sunday.

“He came back with the same quality,” Madrid coach Carlos Ancelotti said. “He helps us a lot in attack.”

The goal allowed Benzema to join former Madrid great Raúl with 228 league goals with the club — second to Cristiano Ronaldo’s 311. It also helped Madrid get back within three points of league leader Barcelona, which earlier Sunday had defeated Getafe 1-0 at the Camp Nou.

Toni Kroos sealed the victory for Madrid with a low shot from outside the area in the 90th.

Benzema’s sixth goal in six matches since the World Cup came with a left-footed volley from inside the area in the 24th minute at San Mames Stadium.

“It’s incredible. Karim has been spectacular,” Madrid defender Nacho said. “He continues to help us with his goals, just like he did last season.”

Benzema won the men’s Ballon d’Or award after a great season and had high expectations heading into the World Cup, but he was dropped from France’s squad because of a thigh injury sustained in training just days before the team’s debut.

The only game in which he had not scored after the World Cup was in Madrid’s 3-2 come-from-behind win at Villarreal in the round of 16 of the Copa del Rey on Thursday.

Eighth-place Athletic had advanced past Espanyol in the Copa but remains winless in three consecutive league games. It lost the Basque Country derby to Real Sociedad in the previous round.

Madrid had not won a league game since December.

Barcelona defeated relegation-threatened Getafe to extend its winning streak to three matches in all competitions.

Pedri scored a first-half winner for the Catalan club, which has won four of its last five matches, with its only setback a draw against Real Betis in the semifinals of the Spanish Super Cup in Saudi Arabia, where it advanced in a penalty shootout before eventually winning the title in a final against Madrid.

“We didn’t play well but it was an important victory,” Barcelona coach Xavi said.

Getafe players did the guard of honor before the match at the Camp Nou because of Barcelona’s Super Cup title. Captain Sergio Busquets also was honored for having surpassed 700 appearances with the Catalan club.

Barcelona defeated Getafe despite playing without suspended striker Robert Lewandowski, the league’s leading scorer. The Poland player was serving the second of a three-game suspension for disrespecting a referee in a league game last year. Forward Ferran Torres also wasn’t available for Barcelona coach Xavi because of a red-card suspension.

Pedri scored the winning goal from close range after an assist from Raphinha in the 35th minute.

Getafe has lost four in a row, including three consecutive in the league. The Madrid club has only four league victories and sits in 16th place, just outside the relegation zone.

Villarreal converted one penalty kick and missed another in stoppage time in a 1-0 home win over Girona.

Striker Gerard Moreno had his spot kick saved four minutes into added time, but playmaker Dani Parejo converted his attempt in the final play of the game in the 111th minute.

The late win left Villarreal in fifth place, tied on points with fourth-place Atletico Madrid, which holds the final qualification spot for the Champions League.

Mid-table Girona played a man down from the 78th as defender Santiago Bueno was sent off with a second yellow card.

Villarreal was coming off a 3-2 home loss against Real Madrid in the round of 16 of the Copa del Rey, when it squandered a two-goal first-half lead. It had beaten Madrid 2-1 two rounds ago in the league, then drew 1-1 at Celta Vigo.

Last-place Elche drew 1-1 with seventh-place Osasuna at home to remain the only team yet to win after 18 Spanish league games this season.