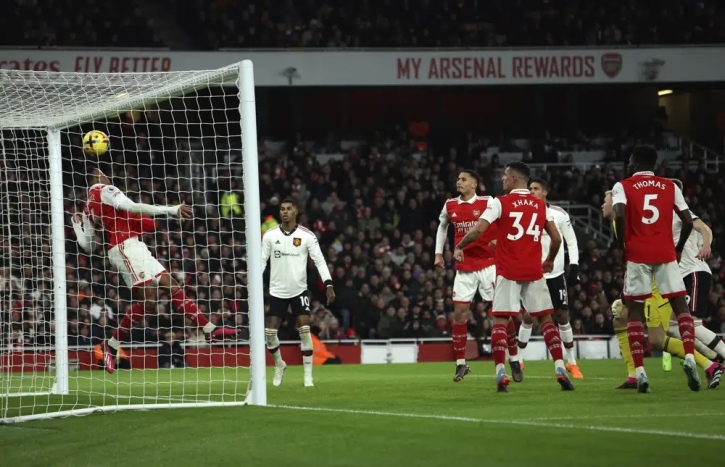 Eddie Nketiah netted twice — including a 90th-minute winner — and Bukayo Saka also scored to give Arsenal a 3-2 win over Manchester United on Sunday to maintain some breathing room atop the table.

The victory keeps Arsenal five points clear of Manchester City with a game in hand and adds another big result against a top rival for Mikel Arteta’s team this season — following wins over Liverpool, Chelsea and Tottenham.

This one came courtesy of two players — Nketiah and Sakah — who came out of the club’s Hale End academy and were 4 and 2 years old, respectively, when Arsenal last won the league 19 years ago.

“You could see how badly we wanted it — for us, for our fans,” Nketiah said. “We kept pushing and pushing.”

United is the only team to have beaten Arsenal this season, and — with Alex Ferguson and David Beckham both watching on in the stands — looked set to deal Arteta’s team another blow when Lisandro Martinez equalized in the 59th minute.

But Arsenal was finally rewarded for a period of relentless pressure over the last 10 minutes, with David De Gea having already denied Nketiah once from close range. The Arsenal striker, who is filling in for the injured Gabriel Jesus, was in the right place again to stick out his foot and poke in a deflect shot from Odegaard.

The celebrations were put on hold as VAR reviewed a possible offside, but the Emirates crowd erupted again when the goal was awarded.

“When you see that purple screen (for a VAR check), your heart goes a bit,” Nketiah said.

Of the many big moments in Arsenal’s season so far, that may have been the biggest.

City’s win over Wolverhampton earlier Sunday had temporarily cut the gap to just two points and Arsenal needed a response to prevent its title credentials from being questioned.

“It doesn’t get much better than that,” Arteta said. “The second half especially, the performance was incredible. To win it in that way makes it even better.”

For United, it was a first league loss since Nov. 6 and further halts the club’s momentum following a midweek draw against Crystal Palace. A great run before that had seen United put itself in position for a surprising title challenge, but Erik ten Hag’s team is now 11 points adrift of Arsenal, having played a game more.

“It’s hard to accept when you lose in the last stage of the game,” Ten Hag said. “We made mistakes with all three goals. Normally we are better in such situations. It can’t happen.”

It started well for United, as Marcus Rashford put the visitors ahead with a long-range strike in the 17th minute. Rashford forced a turnover from Thomas Partey, then dribbled past the Arsenal midfielder before unleashing a perfectly placed 25-yard strike that snuck inside the near post.

Granit Xhaka delivered a cross from the left of the area toward Nketiah, who leaped high at the far post to head past De Gea.

In a frantic game that often featured end-to-end action and chances at both sides, Saka gave Arsenal the lead for the first time in the 53rd when he collected the ball on the left flank, drove past Christian Eriksen and then curled in a strike from 25 yards that beat De Gea at the far post.

But goalkeeper Aaron Ramsdale then made a rare mistake as he collided with his own defender when trying to collect a corner, spilling the ball to Martinez — who reacted quickly to head in the equalizer.

Saka nearly executed a near-replica of his goal as Arsenal chased a winner, but his shot took a deflection off Eriksen’s leg that time and hit the post.

Arsenal’s new signing Leandro Trossard came on in the 82nd and played a part in the buildup to Arsenal’s winner, exchanging passes with the excellent Oleksandr Zinchenko before the ball fell to Odegaard in the area. The Norwegian’s shot took a deflection and may have been heading inside the far post regardless, but Nketiah stuck out his leg to make sure.

“It wasn’t our best start to a game,” Saka said. “But we showed character. ... We have to stay humble. It’s only halfway through the season.”