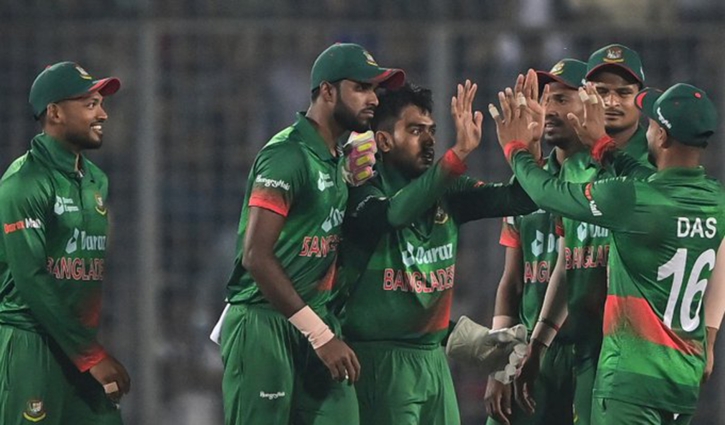 Bangladesh defeated India by five runs in the second match of the three-match ODI series at Dhaka’s Sher-E-Bangla National Cricket Stadium on Wednesday. The victory helped the host to secure the series by 2-0.

After winning the toss, Bangladesh decided to bat first and posted a decent total of 271 runs after losing seven wickets. In reply, India manage to collect 266 after losing nine wickets.

After coming into bat, India got a shaky start against Bangladesh as they lost three early wickets. Virat Kohli and Shikhar Dhawan opened the innings for the men in blue and none could not survive long as Kohli went for while Dhawan scored eight before leaving the crease.

Kohli saw was quick to swivel on his back foot trying to pull Ebadot Hossain through mid-wicket. He got decent contact off the toe end but only succeeded in chopping it back onto the stumps due to lack of bounce.

In the third over, Dhawan was dismissed by Mustafizur Rahman. He got into a horrible tangle trying to play the short ball. The bumper was bowled at a decent pace and venom, Dhawan got up on his toes and tried to fend awkwardly. The ball climbed onto him much quicker than anticipated and hit the splice before looping up to Mehidy Hasan Miraz behind square on the off-side.

Later, the visitors lost the wickets of Washington Sundar and after losing their third wicket inside the first 10 overs, India were under pressure.

However, Shreyas Iyer and KL Rahul tried to turn things around but Rahul could not carry on and walked back to the pavilion after making 14 runs.

After Rahul's departure, Axar Patel came into bat and made a 107-run partnership with Shreyas which was showing some hope to Indian fans. But despite their brilliant performances, the visitors could not avoid defeat.

Shreyas walked off after scoring 82 off 102 delivery while Axar made 56 after facing 56 balls. Miraz removed Shreyas while Axar was dismissed by Ebadot.

Post that, Rohit Sharma was forced to come into the middle.  He was not fit enough but played some gorgeous-looking shots. He remained unbeaten for 51 off just 28 balls. However, in the 49th over, Rohit was dropped twice by Ebadot and Anamul Haque Bijoy.

Ebadot picked up three while Shakib Al Hasan and Miraz bagged two wickets each. Mustafizur and Mahmudullah claimed two more for the Tigers.

Earlier in the first innings, Bangladesh did not get a solid start and were struggling against India bowlers but the hero of the last match, Miraz and Mahmudullah Riyad helped the hosts come back brilliantly into the game. Miraz hit a maiden ODI century while Mahmudullah smashed a half-century.

It was a shaky start for the Tigers as they lost Bijoy early. He walked off after scoring 11 runs. Mohammed Siraj trapped him for LBW.

Later, Najmul Hossain Shanto came into the middle and he was looking good but Bangladesh skipper Litton Das was struggling and threw his wicket away after scoring only seven runs.

The inswinger delivery form Siraj drew him into a loose drive. Litton left a decent amount of bat-pad gap while trying to play straight and was defeated on the inside edge by the sharp movement off the seam.

Shanto could not survive long either as he was dismissed by Umran Malik. It was an absolute beauty from the Indian seamer. The off stump was sent cartwheeling at 151kmph.

It was a flighted delivery from Washington Sundar. Shakib lined up for a slog sweep but edged that high in the air. Shikhar Dhawan moved to his left from short and caught the ball.

Post that, Sundar struck twice in the same over to get rid of Mushfiqur Rahim and Afif Hossain. Mushfiqur made 12 before leaving the crease while Afif went for a duck and at that time, Bangladesh were 69 for six after 19 overs.

Later, Mahmudullah and Miraz came to the rescue as they made a partnership of 148 runs in 163 deliveries.

Mahmudullah scored 77 off 96 balls before heading back to the pavilion. India needed something special to break the partnership and that was what the stand-in skipper KL Rahul provided. Just when Mahmudullah was threatening to really take the bowling apart, he was sent packing. Umran's raw pace did the trick.

However, Miraz continued to charge the visitors as he remained unbeaten for 100 off 83 balls. He smashed eight boundaries and four maximums.

Bangladesh were unstoppable in the death overs. 68 runs came off the last five overs, with Miraz going berserk, also aided by a handy cameo from Nasum Ahmed.