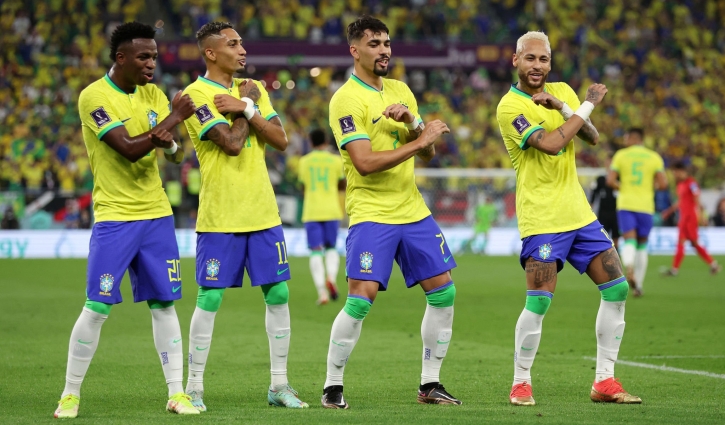 Brazil crushed South Korea by 4-1 in the second round of the Qatar World Cup at Stadium 974 on Monday. The five-time world champions will face last edition’s finalist Croatia in the quarter-finals.

Vinicius Junior gave his side an early lead. It took him only seven minutes to find the back of the net.

Raphinha did superb work down the right flank before pulling it back across the goal for Vinicius at the back post. He took a touch, steadied himself and then put the ball into the top right corner.

In the 13th minute, Neymar scored his first goal in the tournament. Brazil were given a penalty after Richarlison was brought down in the box. Neymar did no mistake from the penalty spot as he rolled his effort into the bottom right corner with real ease.

Post that, Richarlison made it 3-0 for his side in the 29th minute of the match. He showed amazing skill to beat his man before passing to Marquinhos who in turn played the ball to Thiago Silva. He then played through Richarlison, who finished clinically to increase his team's lead.

Later in the 36th minute, Lucas Paqueta scored the fourth one for Brazil. Richarlison carried the ball forward from deep before finding Neymar who in turn played in Vinicius. He then pulled the ball back across the face of the goal for the oncoming Paqueta who finished superbly.

However, they took their foot off the gas in the second half and Korea Republic even managed to score a consolation goal through Seung-Ho Paik but it was too little, too late.

Paik pulled one back in the 76th minute for South Korea to make it 4-1. The ball was whipped in from a free-kick and cleared as far as Paik at the edge of the area. He took a touch and unleashes a fine half-volley that arrowed past Alisson Becker and hit the back of the net.