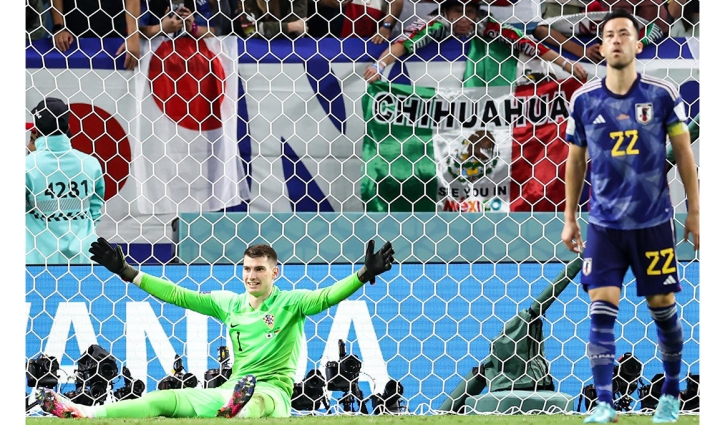 The runner-up of the last World Cup Croatia made it to the quarter-finals of the Qatar World Cup as they defeated Japan in the penalty shoot-out by 3-1 after the match ended in a 1-1 draw at the Al Janoub Stadium on Monday.

Croatia keeper Dominik Livakovic was the hero of the match as he denied three Japan players - Takumi Minamino, Kaoru Mitoma and Maya Yoshida when they came up to take penalties in the tie-breaker. Only Takuma Asano found the back of the net.

Meanwhile, except for Marko Livaja, other Croatian players did not make any mistake in putting the ball into the net.

Both teams started the game with a lot of energy but as the minutes ticked by, Croatia began to control the game and dictate the pace, which was very slow.

Ivan Perisic had Croatia's best chance of the half but could not beat Shuichi Gonda from close range following a mistake from Tomiyasu.

Japan found some momentum at the end of the half and made it count after Daizen Maeda scored his first goal of the tournament. He reacted quickest to Yoshida's knockdown to give Japan the lead in the 43rd minute.

Maeda gave the Samurai Blue the lead just before half-time. Japan took a short corner and Ritsu Doan sent in a cross. Yoshida won the initial header and Maeda reacted quickest to the knockdown.

The only highlight in the second half was Perisic's equaliser as if the bullet header could not be stopped this time by Gonda. Lovren’s cross into the box was slightly underhit but it favoured Perisic who headed the ball into the bottom right corner with a lot of power.

Extra time was quiet and saw a lack of chances other than a deflected effort from Mitoma.

Croatia have won all three of their World Cup penalty shootouts (also vs Denmark and Russia in 2018). The win means they will face either Brazil or South Korea in the quarter-finals while Japan will be on their way back home.