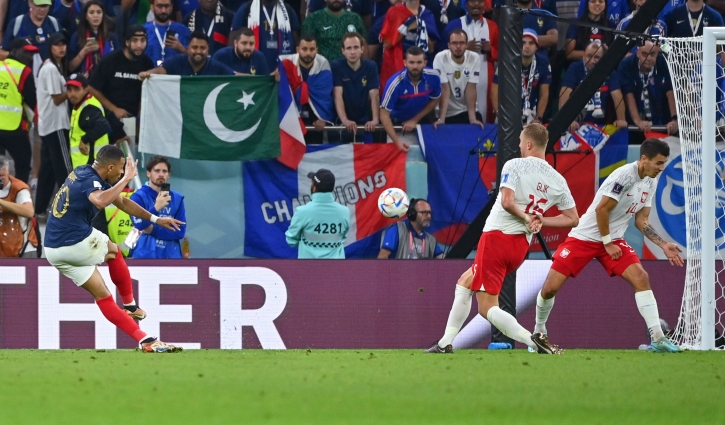 Defending champion France made it to the quarter-finals of the Qatar World Cup as they defeated Poland by 3-1 at the Al Thumama Stadium on Sunday. The two-time world champions will face either England or Senegal in the next stage.

Olivier Giroud opened the scoring for Les Bleus. He found the back of the net just before the break. He became France's record goalscorer (52, one more than Thierry Henry) as he places a left-footed strike past Wojciech Szczesny.

Kylian Mbappe slid a through ball into the path of Giroud in the box as he gained a step on Jakub Kiwior. The forward struck on the turn and had the placement to find the bottom-right corner.

However, in the second half, Mbappe stole the light of the show as he scored a brace to make it 3-0 for his side.

France cleared their lines at one end before Giroud released Ousmane Dembele on the counter. The winger cut inside from the right flank and fed Mbappe in space. Mbappe took a touch and hammered a right-footed strike past Szczesny in the 74th minute.

Later, the Paris Saint-Germain (PSG) star netted his ninth goal of the World Cup in the 91st minute. It was another brilliant finish from Mbappe. Marcus Thuram slid a pass inside for the forward, who took a touch out of his feet before smashing a right-footed strike into the top-right corner.

Meanwhile, Polish striker Robert Lewandowski scored his second goal of the World Cup with his second effort to end his tournament with a consolation goal. He did a stutter-step as he did with his first attempt, but on this occasion, he fired his effort into the bottom-left corner.