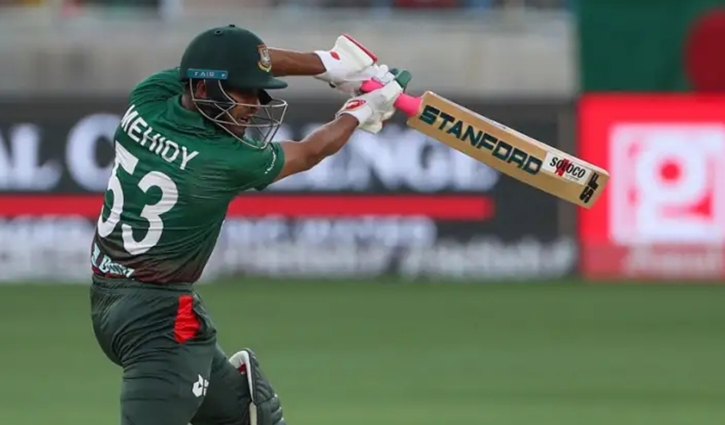 After a brilliant bowling performance against India, Bangladesh could not bat well but Mehidy Hasan Miraz’s unbeaten 38 runs helped the Tigers win the match by just one wicket in the first match of the three-match ODI series at the Sher-E-Bangla National Cricket Stadium on Sunday.

After winning the toss, the hosts invited India to bat first. The visitors were folded for 186 runs in 41.2 overs. In reply, Bangladesh reached there un the 46th over after losing nine wickets and went 1-0 up in the series.

India got a perfect start with the ball as the Tigers lost Najmul Hossain Shanto in the very first ball. Deepak Chahar removed him as the batter just hung his bat outside and the ball took the edge after the nice shape. Rohit Sharma did not make any errors to grab the catch.

After Shanot’s departure, the Tiger batters started moving watchfully. Litton Das and Anamul Haque Bijoy made a small partnership of 26 runs. Bijoy went for 14. Mohammed Siraj sent him back to the pavilion.

Post that, Litton and Shakib Al Hasan tried to turn things around but after scoring important 41 runs, Litton threw his wicket away.

It was an off-break delivery from Washington Sundar. Litton shuffled across to work it into the leg side but the ball spun more than he anticipated, kissed the bat and KL Rahul gloved the ball.

In the 24th over, veteran allrounder Shakib was dismissed for 29 as Sundar struck again. It was a flighted delivery and Shakib was deceived in the air, the ball dipped on him and he had no control over the drive, hit it uppishly towards cover where Virat Kohli flung to his right and plucked it out with one hand.

After their departure, Bangladesh were under huge pressure. On the other hand, Afif Hossain went back after scoring just six and Ebadot Hossain and Hasan Mahmud both went for ducks. At that moment the Tigers were, 136 for nine and needed 51 runs to win the match.

Bangladesh brilliantly came from behind as Miraz and Mustafizur Rahman made an unbeaten partnership of 51 runs and snatched the victory away from India.

Earlier, Tiger allrounder Shakib was breathing fire as he scalped five wickets after conceding only 36 runs and Ebadot picked up four.

Bangladesh got a decent start with the ball as Miraz struck early to remove Shikhar Dhawan.

Dhawan tried the reverse sweep but he missed and it hit him on the chest, unfortunately, hit the hand as well and went back onto the stumps. Miraz got his reward for some tight bowling.

After losing the first wicket, the men in blue started to play watchfully but in the 11th over they lost their skipper Rohit after making 27 runs as Shakib dismissed him.

In that same over Shakib struck again to get rid of Kohli who scored nine. Litton Das dived full length to his right to pluck the catch out of the air. Kohli stood stunned looking at that piece of fielding.

This was full and wide of off stump - the first time he did not target the stumps in the over. Looked like Kohli was not expecting a wider line and he went hard on the drive with one hand. Got deceived in flight so no control over the shot and the Bangladesh captain did his bit with a brilliant piece of fielding.

After losing three wickets India were under pressure. Shreyas Iyer and KL Rahul tried to make some resistance and made a small partnership of 41 runs as Iyer could not survive long.

In the 20th over, Ebadot came into the attack and dismissed Iyer who made 24 runs. The short ball became an Achilles heel for Iyer. Ebadot was rewarded for his persistence. He kept bowling short of length and finally his plan worked out.

After Iyer’s departure, Washington Sundar came into the middle but could not carry on and walked off after scoring 19 runs. Later the other batters - Shahbaz Ahmed, Shardul Thakur, Deepak Chahar and Mohammed Siraj followed in the footsteps of Sundar.

However, Rahul continued to fight from the other end and made important 73 runs off just 70 deliveries. He hit five boundaries and four maximums before leaving the crease.