Argentina through to quarter-finals of World Cup 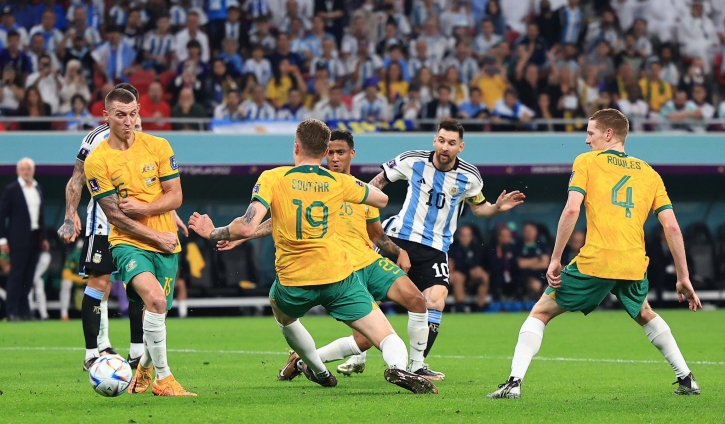 Argentina made it to the quarter-finals of the World Cup as they beat Australia 2-1 at the Ahmad Bin Ali Stadium on Saturday. The two-time world champions will face Netherlands who defeated US by 3-1 in the next stage.

Argentina talisman Lionel Messi led his team from the front. It was his 1000th match for club and country and he broke the deadlock in the 35th minute of the match to score his 94th international goal.

Messi’s initial free-kick into the six-yard box was repelled by Harry Souttar but the Albiceleste regained possession and looked to hit from a central position in the second phase.

Alexis Mac Allister played a pass into Nicolas Otamendi whose first touch teed Messi up for a shot expertly and the captain met it with a sweet hit into the bottom-left corner to beat Mat Ryan.

The Parsi Saint-Germain (PSG) man has seven Ballon d'Ors in his bag, winning every individual award possible. However, he did not have any goal in the knockout stage of the World Cup until this match.

Meanwhile, Messi surpassed Diego Maradona as he netted nine goals in World Cup, one more than the late Argentine legend.

In the second half, Julian Alvarez doubled the lead for the Albiceleste. Argentina’s pressing paid dividends with the midfield stepping up immediately to try and win the ball back following Ryan’s throw.

A poor pass back from Rowles put the goalkeeper under pressure inside his area and allowed Alvarez to steal it back and slotted it into an empty net in the 57th minute.

However, Australia pulled one back in the 77th minute. It was a goal out of absolutely nowhere with Craig Goodwin’s effort from 25 yards out following a repelled cross taking a touch off Enzo Fernandez’s face and wrong-footing the goalkeeper. It went down as an own goal for the Benfica midfielder.

In the last minute of the match, Argentine keeper Emiliano Martinez denied Garang Kuol. A cross to the far post was controlled inside the penalty area with a lovely touch by Kuol who immediately found himself in enough space to turn. The substitute fired a low shot that Martinez saved superbly.