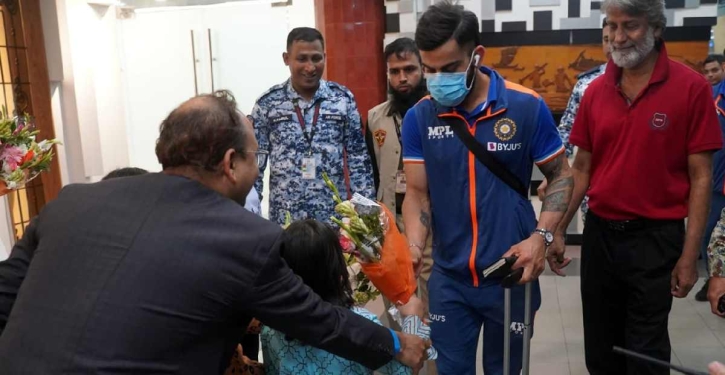 India team, led by Rohit Sharma has arrived in Bangladesh on Thursday to play their first bilateral series here in Bangladesh since 2015, reports BSS.

The India team landed in Bangladesh at 6:40pm after boarding a flight from Mumbai.

The Men in Blue are scheduled to play three ODIs and two Tests over the month. Both squads will be led by Rohit Sharma.

India named a strong team for both of the formats of cricket but notably, Jasprit Bumrah – currently recovering from a back injury – has not been included in either team. Prithvi Shaw doesn’t find a place either.

In the last bilateral series in 2015, India lost their first-ever ODI series to Bangladesh by 2-1. The solitary Test between the two teams was drawn. India held the edge before rain washed out the game.

Their tour will start with the ODI series with the first match on December 4 at Sher-e-Bangla National Cricket Stadium. The second match will also be held at the same venue on December 7 before the two teams will play the final ODI at Zahur Ahmed Chowdhury Stadium in Chattogram on December 10.

Chattogram will also host the first Test, slated for December 14-18. The two teams will then travel back to Dhaka for a series-ending Test from December 22-26.

India will return to their country on December 27.