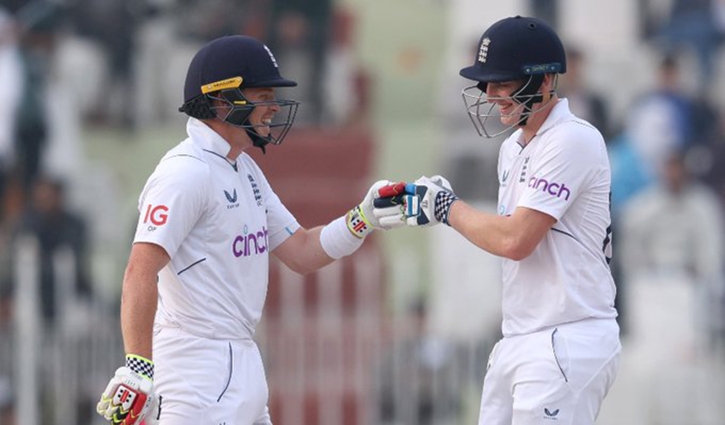 It was a brilliant opening day for England in the Rawalpindi Test against Pakistan as they bagged 506 runs after losing only four wickets. Meanwhile, four batters hit centuries.

Only 75 overs were played but the English batters were so aggressive that the hosts' bowlers failed to stop them from collecting 500 plus runs on day 1. 174 runs came in the morning session, 158 runs in the afternoon and 174 again in the evening session. The last 174 came off just 21 overs.

On a pitch that literally zero in it for the bowlers, Zak Crawley and Ben Duckett got the visitors off to a sensational start, recording a century stand in 13.5 overs.

Crawley made his hundred off 86 balls and soon Duckett followed. Joe Root missed out trying to play an aggressive sweep, but Ollie Pope got his hundred.

Harry Brook smacked Saud Shakeel for six fours in an over and even had the chance to make England's fastest Test hundred but slowed down in the 90s to miss that record.

He became the fourth England batter to record a hundred on Thursday and he got there in 80 balls. Stokes came out in T10 mode if you may call so and raced to 34 off 15 balls. Light came to Pakistan's rescue to end the misery of the day.