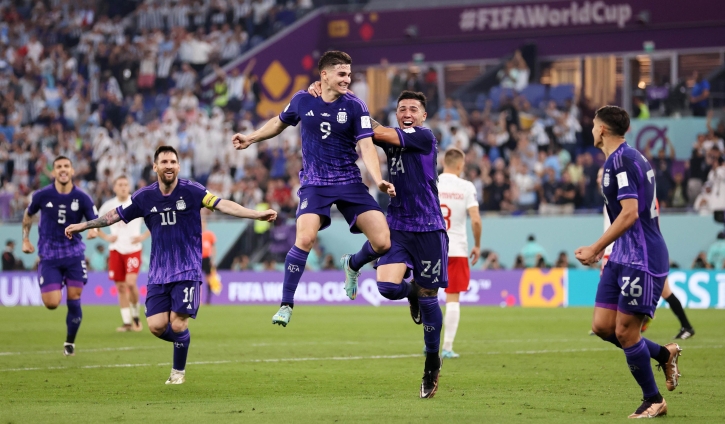 Argentina picked up their second win of the ongoing FIFA World Cup as they beat Poland 2-0 at the Stadium 974 on Wednesday. The Albiceleste finished as the champion of Group C and will face Australia in the Round of 16.

Meanwhile, Poland also made it to the next round despite losing the match. Mexico and Poland earned the same four points from three matches but the goal difference helped them to secure the second spot in the group.

The South Americans thoroughly dismantled the European side to do it. Alexis Mac Allister and Julian Alvarez got the goals but they should have had more after Lionel Messi had a penalty saved in the first half.

Argentina got the lead in the 46th minute, seconds after the restart. Mac Allister converted Nahuel Molina's cross, finding the bottom left corner from the centre of the box.

Alvarez doubled the lead in the 67th minute. The Manchester City man controlled Enzo Fernandez's pass and held off his man to send a stunning strike past Wojciech Szczesny.

Earlier in the first half, Messi failed to convert a goal from the penalty spot. He sent the ball to the right of the goal. Szczesny dived the right way and swatted the kick aside with a strong right hand.

In the other match, Mexico ended up beating Saudi Arabia  2-1, which was not enough for them. Poland finished second and will face France in the knockout stage.