Argentina vs Poland: Messi vs Lewandowski 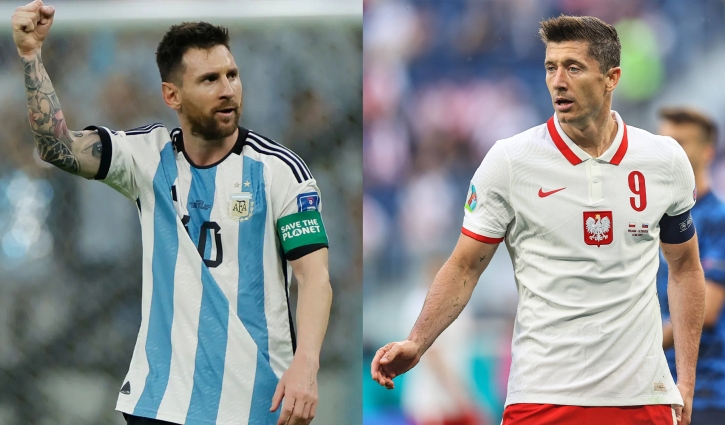 Argentina will take on Poland in their last group-stage match of the ongoing FIFA World Cup. The match is scheduled to start at 1am (Thursday) Bangladesh standard time.

La Albiceleste will reach the last 16 if they win the match. A draw also can send them to the next round but it would depend on Saudi Arabia versus Mexico match. Meanwhile, if Poland earned three points, the Argentina team has to return to their country.

However, The South American powerhouse is the considerable favourite in this clash. On the other hand, the European side will try to get at least one point as that would be enough to finish as the group champion.

The Argentine players will surely depend on their talisman Lionel Messi while the Polish will pray for Robert Lewandowski to find the back of the net. Back in 2021, these two superstars fight for the 2021 Ballon d’Or and FIFA Best Player awards.

Messi snatched the Ballon d’Or which is considered the most prestigious individual award in football. However, Lewandowski bagged the  FIFA Best Player.

First place in Group C is on the line when these two nations meet, a spot which Argentina did not expect to be in, reports GOAL. With only three points at the moment, Argentina stand in second place in the group with no certainty of advancing. Poland remains undefeated at this World Cup with a draw against Mexico and a win against Saudi Arabia.

Poland will qualify for the round of 16 with just a draw from this contest and will clinch first place with a win. Argentina can still advance with a draw but will require either a draw or a Mexico win by less than four goals to go through.

Each team in Group C is still alive heading into this final group match.

Since the European team only require a draw to advance, they will have a defensive game plan, dropping at least six or seven players back to defend against the Argentine attack. I think this gameplay will be similar to Argentina vs Mexico match, with Argentina dominating possession and Mexico struggling to create offensive opportunities.

Poland will rely on the counter-attack to find the back of the net in this contest, and with Lewandowski up, they are a legitimate threat to score anytime.