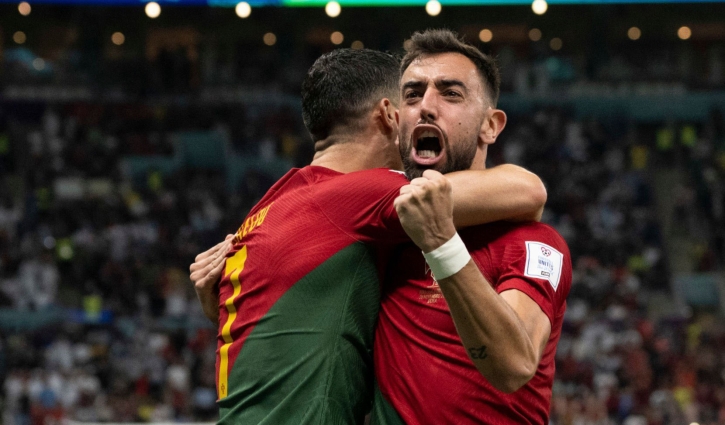 Portugal picked up their second win in the Qatar World Cup and qualified for the Round of 16 after beating Uruguay by 2-0 at the Lusail Iconic Stadium on Monday.

Bruno Fernandes was the start of the show as he scored both goals and was close to slamming the first hat-trick of the event but unfortunately hit the bar in the stoppage time.

The Manchester United player broke the deadlock in the 54th minute. However, Cristiano Ronaldo was claiming the goal but FIFA awarded the opener to Fernandes.

Portugal opened the scoring with their first shot on target in the game. Raphael Guerreiro touched it into Fernandes who looked to run down the left before changing his mind and cutting back inside. He curled what looked like a great cross to Ronaldo in the middle. Ronaldo failed to touch the ball but the ball went into the net.

Fernandes doubled the lead from the penalty in the stoppage time. It was a slow run-up and he stuttered it just in front of the ball before doing his trademark hop and calmly slotting the ball down the left of the goal, sending the keeper the wrong way.

The European side will just need a point against South Korea to finish top of the group in their final group-stage match. Uruguay can still qualify for the knockout rounds but they will need to beat Ghana and hope South Korea do not win.