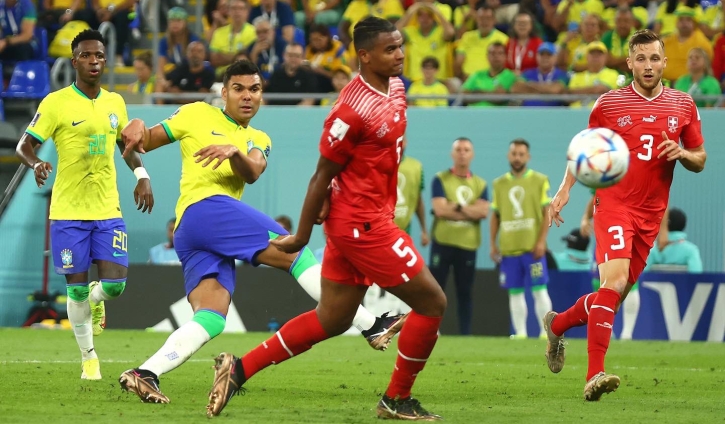 A late Casemiro goal helped Brazil to pick up their second win in the Qatar World Cup as they beat Switzerland by 1-0 on Monday. They became the second team to book a spot in the Round of 16 of the competition.

In the 83rd minute, Selecao got the breakthrough. Vinicius' inside pass was flicked on by Rodrygo goes and the ball took one bounce in the box before Casemiro smashed a half-volley that sent the ball spiralling into the far corner.

Earlier, a goal by Vinicius was ruled out for an offside in the build-up. Switzerland did threaten going forward but Brazil kept them at bay relatively easily and eventually their quality in the final third told as Casemiro lashed in the winner.

The Selecao are home and dry in the knockouts while Switzerland have plenty to do in their final game against Serbia in order to join them.

Brazil forced Sommer into some light work with shots from Vinicius and Raphinha but their hero against Serbia, Richarlison, was kept at arm's length. Switzerland looked dangerous on the break at times but could not find the net.

Raphinha was a threat when cutting onto his left foot from the right and played a big part in the biggest chance people witnessed in the first half.

His cross should have been put into the net by Vinicius and that was one of his two key passes before half-time. The Barcelona winger has had a shot from distance himself, as well as completing seven crosses, two of which created chances for his teammates from set-pieces.