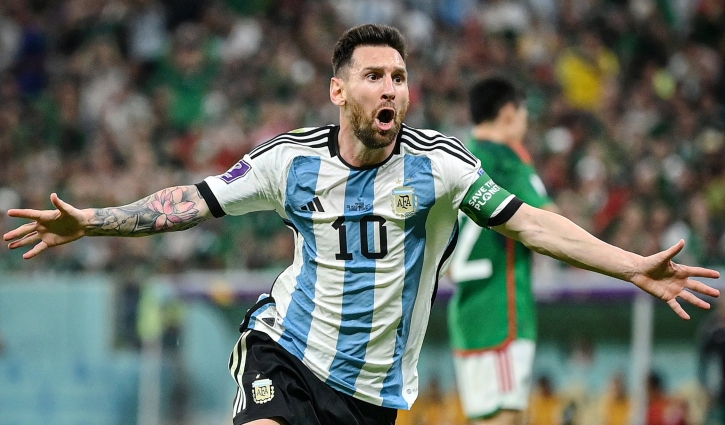 Lionel Messi led his team from the front as Argentina beat Mexico in their second group-stage match of the World Cup by 2-0 at the Lusail stadium on Saturday. This victory helped them to climb up to the second spot of Group C with three points.

La Albiceleste were trying hard to find the back of the net but the Mexican defence was solid enough to stop the two-time world champions. However, Messi broke the deadlock in the 64th minute of the match.

Just when his side needed it most, the Paris Saint-Germain (PSG) man popped up with a bit of magic, finding the bottom corner from 25 yards out with a crowd of bodies in the way. Angel Di Maria's bouncing pass to Messi from the right wing was credited as the assist.

It was Messi’s 93rd international and eighth World Cup goal. He has now scored in his last six Argentina matches, equalling his best-ever scoring streak for his country.

After scoring the goal, Argentina started losing their possession which allowed their opponent to go all-out attack mode. However, they could not convert any attack into a goal. On the other hand, they conceded another one in the 87th minute.

It was a sublime strike from Enzo Fernandez who received a pass from Messi following a short-corner routine and executed a couple of stepovers ahead of Erick Gutierrez before dispatching a curling effort into the top corner.

Meanwhile, Messi became the only player in history to assist a goal at five different FIFA World Cups.

It may not have been a memorable performance but Argentina got the win they needed. The South American powerhouse wrap up the group stage on Wednesday against Poland when Mexico play Saudi Arabia.