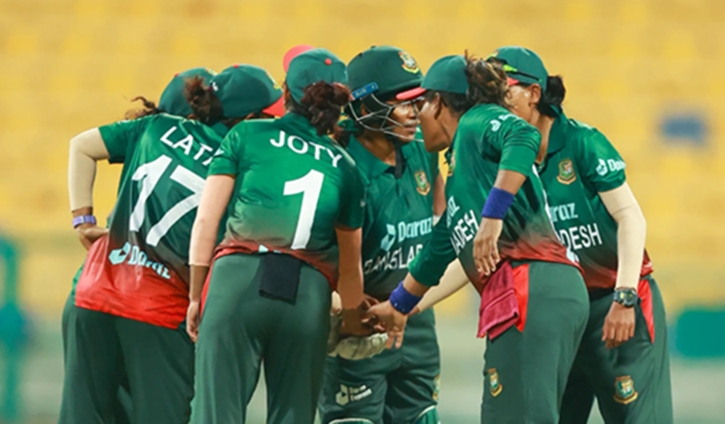 After an impressive bowling performance, Bangladesh batted really well in the opening match of the Women’s Asia Cup T20 against Thailand at the Sylhet Outer Cricket Stadium on Saturday.

Thailand won the toss and decided to bat first. They were folded for just 82 runs and the defending champions reach there in just 11.4 overs and got a thumping victory over Thailand by nine wickets.

It was a solid start with the bat for the hosts as the openers - Shamima Sultana and Fargana Hoque made a partnership of 69 runs which was enough to ensure the victory.

Sultana who was named the Player of the Match made an absolute mockery of the total. She scored boundary after boundary to deflate Thailand very early and when the opening stand reached fifty, she had made 42.

Unfortunately, the batter missed her half-century as she walked off after scoring 49 off just 24 deliveries. However, Fargana who remained unbeaten for 26 runs and Nigar Sultana later finished things off in style.

Earlier, it was a steady start for the visitors as they collected just 14 runs from the first five overs after losing a single wicket. However, they collapsed to spin and could not accelerate the run rate and posted 82 runs after losing all their batters.

Only five boundaries were hit in the Thailand innings. Two batters made it to the 20s and four overall to reach double-digit scores.

Phannita Maya who played with a refreshingly positive approach and tried to take on the bowlers with a strong bottom-hand play scored 26 while Natthakan Chantham went for 20., Rosenan Kanoh and Sornnarin Tippoch made 11 and 10 runs respectively.

Former skipper Rumana Ahmed claimed three and ripped through the middle order of their opponents. Nahida Akter, Shohely Akhter and Shanjida Akter picked up two each. Salma Khatun bagged one wicket for the hosts.