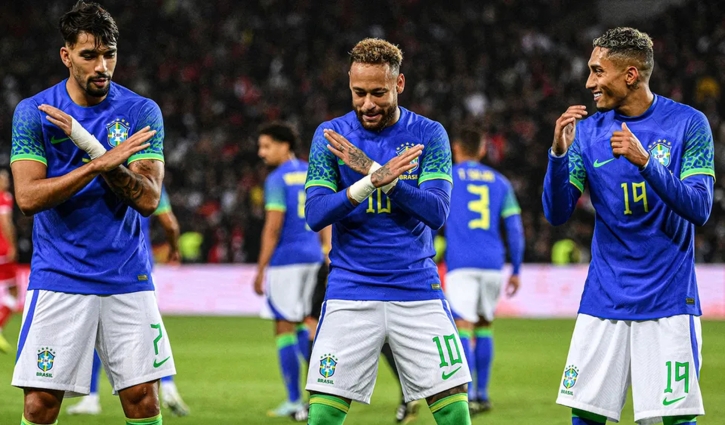 Brazil thrashed Tunisia by 5-1 in an international friendly match in Paris on Tuesday. Raphinha struck twice while Richarlison, Neymar and Pedro one each for the Selecao.

Raphinha gave an early lead to his side as he found the net in the 11th minute. Casemiro's long ball found Raphinha running into the box. With Dahmen rushing out, the Barcelona winger looped a header over the goalkeeper Aymen Dahmen from the edge of the box and it was an absolutely sensational effort that flew into the top corner.

However, Tunisia fought back and took no time to find the equaliser as Montassar Talbi scored in the 18th minute to make the scoreline 1-1. That was the first and last time Tunisia celebrated something as later they conceded four more goals.

In the next minute, the five-time world champions took the lead. This time Richarlison was the goalscorer. It was almost straight from kick-off. Raphinha put Richarlison in behind the defence. Dahmen made himself big but the Tottenham striker lashed a low shot beneath his reach and into the back of the net.

Neymar joined the party in the 29th minute. He did no mistake to find the back of the net from the penalty spot. It was his 75th international goal and just three goals away to surpass legend Pele who slammed 77 international goals.

In the 40th minute, Raphinha struck his second goal of the night to extend the lead. In the second half, Pedro managed to put his name on the scoresheet and Brazil left the ground with a huge win of 5-1 over Tunisia.