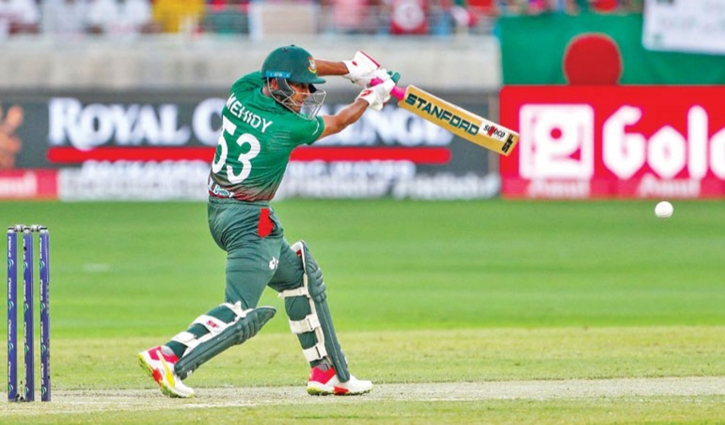 It was comparably a better start for Bangladesh as they lost just a single wicket inside the first six overs and posted 169 runs after losing five wickets in the second T20I match against United Arab Emirates (UAE) at the Dubai International Cricket Stadium on Tuesday.

After asking to bat first, the Tigers got a flying start. They collected 48 runs from the power play and lost Sabbir Rahman’s wicket who went for a duck in the previous match. This time he walked back after scoring 12 off nine deliveries.

Post that, Litton Das came into the middle but could not do that much harm as he was dismissed for 25 runs. He cut straight to backward point. Litton went through despite having no room and found the fielder to perfection.

Later, Afif Hossain who hit a half-century in the first match of the series followed the footsteps of Litton and walked back to the pavilion after scoring 18 off 10.

Afterwards, Mehidy Hasan Miraz who opened the innings for Bangladesh was dismissed. Miraz made 46 after facing 37 balls with the help of five boundaries.

This ball pitched almost a half foot outside the leg stump. Miraz slogged but missed and the ball hit on the pad. It would have hit the stumps alright but that never looked out because of where it pitched.

Mosaddek Hossain later threw his wicket away after scoring 27 off 22 deliveries. Mosaddek tried for a big hit but mistimed and holed out in the long-on.