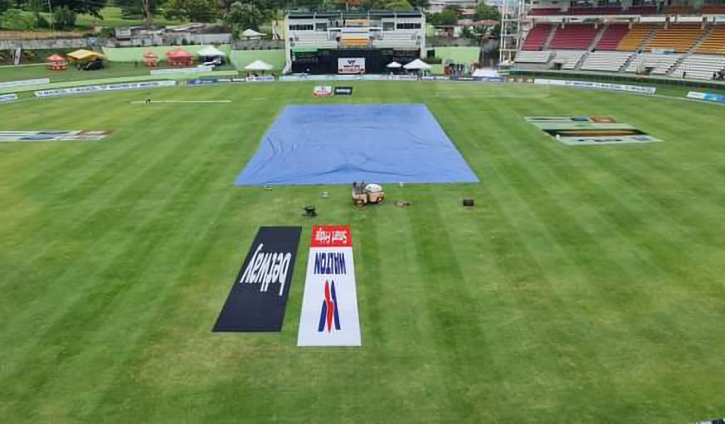 The first T20I of the three-match series between West Indies and Bangladesh washed away due to rain on Saturday at Windsor Park in Dominica.

The toss was delayed by more than an hour due to the wet outfield. The hosts won the toss and asked Bangladesh to bat first under the overcast condition. Due to the rain, the match was reduced to 16 overs.

The Tigers got a new opening pair in this match in Anamul Haque Bijoy and Munim Shahriar. However, they failed to impress. Munim fell victim to Akeal Hosein off the third ball of the innings scoring only two runs.

Bangladeshi batters took too many risks aiming to score faster and pose a challenging total to the hosts. But the strategy didn't work well as the tourists lost quick wickets regularly.

They were down to 77 for seven from 36 for one. Apart from Anamul (16), Shakib Al Hasan (29) and Nurul Hasan Sohan (25), none was able to reach a double-digit total against the quality bowling attack of the hosts.

The rain turned heavier after Bangladesh scored 105 for eight in 13 overs. It was the second time the match was halted. The cut-off time for a 5-over chase was 5:18pm (in Dominica). As the time crossed, the umpires decided to call it off.

West Indies will be disappointed, they would have fancied this chase. On the other hand, Bangladesh might just be happy that they will go into Sunday's game with the series still wide open.

The second match of the series will be played on Sunday at 11:30pm (Bangladesh time) at the same venue while the last match is scheduled to take place in Providence Stadium, Guyana on July 7.