U19 WC: Bangladesh lose to England in WC opener 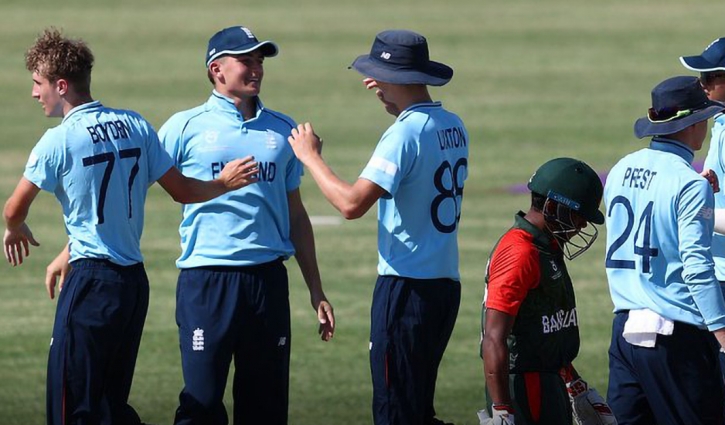 It was a disappointing start for the defending champion Bangladesh as they lost their first match against England by seven wickets on Sunday.

It was an embarrassing batting performance from the young Tigers. After winning the toss, they decided to bat first. Later, they were bowled out for 97 runs. They played only 35.2 overs.

Bangladesh captain Rakibul Hasan said, “I think we need to look at our batting and need to improve it. Hopefully, we can bounce back in the next game.”

25.1 overs were enough for the Three Lions to reach the target. Jacob Bethell was close to pick up his half-century but was run-out for 44 runs. But that didn’t hamper much as they won by seven wickets.

English bowlers were ruthless from the beginning of the match. Bangladesh lost four batters inside 10 runs. At one point the young Tigers were 51/9.

England skipper Tom Prest said, “I think it's the perfect start really. For our bowlers to get them under 100, couldn't have asked for anything better.”

Ripon Mondol's unbeaten 33-run helped the defending champions to go close to the 100-run mark. Seven batters walked off before touching the double-figure run, while skipper Rakibul went for a duck.

For England, Joshua Boyden picked up four conceding only 16 runs in nine overs. For his brilliant performance, he was named the Man of the Match.

Bangladesh will face Canada in their second match on January 20 at Saint Kitts and Nevis.