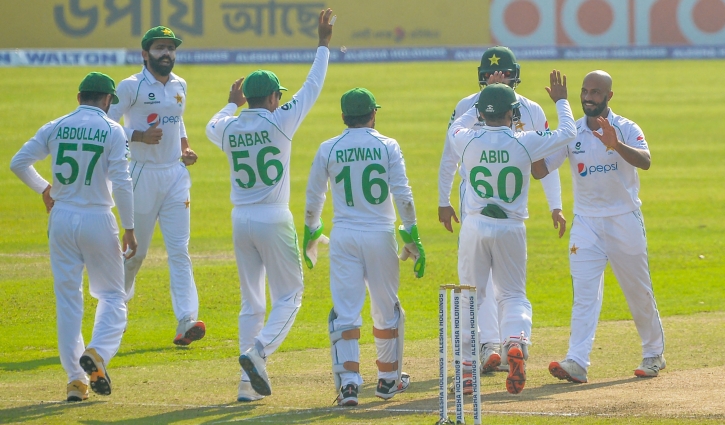 Bangladesh’s batting side struggled a lot against Pakistani bowlers. In the Chattogarm Test, they plated comparatively better but lost that. Now, in Dhaka, they couldn’t match Pakistan’s first innings run after playing two innings.

Pakistan beat Bangladesh by an innings and eight runs in the second and final Test. they won the series by 2-0.

Bangladesh captain Mominul Haque said, "We had an opportunity to do better than the first innings today, and we had some very promising performances from Shakib, Liton and Mushfiq, but in the end, we could not complete the job.”

Pakistan skipper Babar Azam said, “Our batsmen and especially openers gave us good start and our mindset was just to dominate despite the bad weather and Sajid's spell gave us momentum and confidence to win this game.”

He didn’t forget to praise the groundstaff and said, “Credit to groundstaff, they have done a really great job with all the rain around in the last few days.”

The visitors batted first. Due to bad light, the first day was called off early. Only 38 balls were played on the second day while the third day was washed away.

On the fourth day, Pakistan declared their innings after 300 for four. In reply, Bangladesh bowled out for 87, their lowest total at home.

The Tigers came to bat again as Pakistan enforced the follow-on. And the top-order disappointed the fans again. After adding 25 runs they lost four wickets.

Liton Das and Mushfiqur Rahim's partnership kept Bangladesh into the game. Their 73-run partnership came to an end as Liton departed after scoring 45.

Then Shakib Al Hasan come to bat and played brilliantly. Though he was responsible for Mushfique’s runout, his performance with the bat showed light to Bangladeshi fans but he was dismissed by Sajid Khan after scoring 63 runs.

Later, Taijul Isalm and Khaled Ahmed couldn’t survive much and Pakistan squeezed out a victory over the Tigers.

Sajid Khan dismissed four while Hasan Ali and Shaheen Shah Afridi picked up two wickets each. Skipper Babar Azam removed Mehidy Hasan Miraz as they were in much need of a breakthrough.