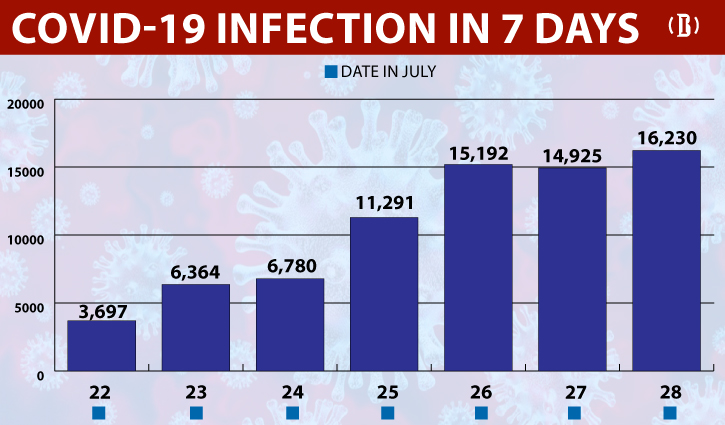 Bangladesh reported an unprecedented 16,230 cases of Covid-19 in the last 24 hours till 8 am Wednesday, the country's highest ever daily count.

The deadly virus also took 237 lives in the same period, Directorate General of Health Services (DGHS), said in a press release this evening.

Previous record was set on July 26 with 15,192 cases and the country has been seeing nearly 9,000 cases on an average every day for the past seven days.

Meanwhile, the daily test-positivity rate increased 30.12 percent which was 28.44 percent on Tuesday and 29.82 percent on Monday while the World Health Organization (WHO) recommends a five percent or below rate.

The updated official data pushed up the death toll of the virus to 20,016 while the caseload to 12,10,982, said the government data.

The country has been seeing nearly 200 deaths every day for the past two weeks and breaking records of daily cases and deaths almost every other day.

Besides, the fatality rate slightly declined to 1.65 percent which was 1.66 percent a day ago after remaining unchanged at 1.65 percent for a few days, said the DGHS.

The new cases were detected after testing 53,877 samples at 639 government authorised laboratories in the country at the same time.

Just like the previous days, Dhaka reported the highest deaths as 70 more people died with the fatal disease during this time, followed by 62 deaths in Chattogram, 34 in Khulna, 21in Rajshahi, 18 in Sylhet, 16 in Rangpur, nine in Barishal and seven in Mumensingh divisions.

Of them, 167 died at public hospitals, 57 at private hospitals and 13 at houses in the same period.

Meanwhile, Worldometer, a reference website that provides counters and real-time statistics for diverse topics, has recorded 41, 96, 774 deaths so far caused by the virus and 19, 61,71, 514 cases worldwide.

Earlier on Monday, Health and Family Welfare Minister Zahid Maleque claimed that Bangladesh will get 21 crore doses of Covid-19 vaccine by early 2022 and these vaccines will meet the needs of 14 crore people that means 80 percent of total population in the country.

Later on Tuesday, Home Minister Asaduzzaman Khan Kamal, said that the Covid-19 vaccination programme at union level will start across the country on August 7.

can get vaccinated at the union level showing his or her NID card. Vaccination centres will be set up in unions across the country before August 7, he said.

Those who do not have any NID will be vaccinated under a special arrangement, he added.

The 14-day of nationwide lockdown entered the fourth day on Monday which was reimposed on July 23 to contain the spread of the coronavirus in the country.

The government has relaxed the lockdown restrictions for eight days from July 15 on the occasion of the Eid-ul-Azha, the second largest religious festival of Muslims, celebrated on July 21.

During the period, all people have been asked to wear mask and maintain health guidelines.

The lockdown restrictions will be lifted on August 5 as per the order.