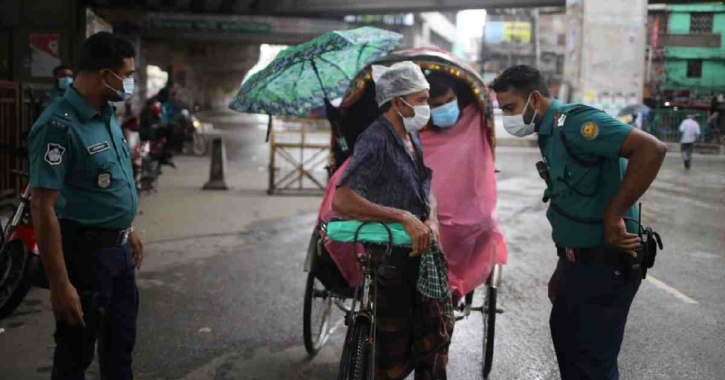 The 14-day nationwide lockdown re-imposed on Friday in order to contain the spread of coronavirus has made metropolitan into a deserted city as the confinement entered the second day, on Saturday.

However, police arrested 383 people and penalised 441 vehicles in capital Dhaka for violating restrictions.

However, swarms of incoming people, mostly workers, were seen walking towards the capital from neighbouring suburban vicinities.

While visiting some of the places Business Insider Bangladesh found the members of law enforcement agencies patrolling along the city streets and questioning the people who have flouted lockdown rules.

Some rickshaws and private cars were seen plying on the streets at Farmgate, Kawranbazar, Motijheel, Asadgate, Gulshan, Nabisco, Badda, Kallyanpur and Shaymoli areas.

The capital Dhaka looked like a ‘cast away’ city on Friday, the first day of the 14-day lockdown, but the presence of rickshaws, motorbikes and private cars rose compared to the first day.

Policemen were filing cases and realising fine against those who failed to show a valid ground of coming out of home.

Some teams of the law enforcers were seen alerting citizens by loudspeakers and asking them to make the lockdown successful.

The government has been imposing nationwide lockdown from April 5 in phases to contain the Delta variant induced second wave of the coronavirus.

Amid the alarming rising Covid-19-positive cases, the government went on a strict lockdown for a week from July 1 and later it relaxed it on July 15 due to the Eid-ul-Azha celebration, on July 21.

The lockdown again was enforced on Friday which will continue until August 5.

Police arrested 383 people and penalised 441 vehicles in capital Dhaka for violating restrictions on Saturday, the second day of the strict post-Eid nationwide lockdown.

Meanwhile, mobile courts collected Tk 95,230 in fines from 137 people for having no valid reason to roam around and not maintain health guidelines.

The Traffic Division collected Tk 10.83 lakh in penalties, from vehicles failing to comply with the curbs in place.

Roads in the capital fell almost silent on Saturday, as law enforcers dissuaded inessential travel on the second day.

There were fewer private cars and commercial vehicles on the main roads as compared to first day Friday.

RAB and Army personnel patrolling the streets of Dhaka alongside police were seen monitoring the movement of vehicles and people at check-posts in different areas.

“Though some of the long-distance buses and vehicles were allowed to enter Dhaka through Uttara and Abdullahpur on Friday, we strictly followed a 'no tolerance' policy on Saturday," said traffic police officer Akhtar Hossain.

The few private cars, microbuses and other commercial vehicles that were caught plying on the roads without any valid reason were fined or compounded by police.

A police officer in the Amin Bazar area said, "Some people have been trying to enter the city showing medical documents but most of those were found to be old and invalid.

The lockdown restrictions came into force at 8am Friday and will continue till August 5 midnight, unless extended again as announced by the government on Thursday, upping its guard against the devastating Delta variant of Covid-19.

On Thursday, State Minister for Public Administration Farhad Hossain told UNB that this lockdown will be stricter than the one imposed last time. Police, paramilitary Bangladesh Border Guard and the Army will keep a strict vigil on the roads, he said.

Earlier, the government eased the lockdown restrictions in the country for eight days due to Eid-ul-Azha that was celebrated on Wednesday.