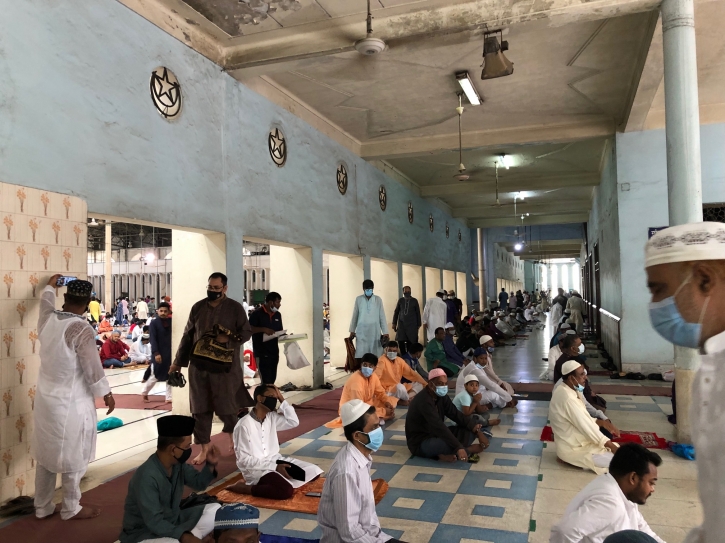 Holy Eid-ul-Azha is being celebrated all over the country through prayers and offering sacrificial animals.

The first congregation of Eid was held at Baitul Mukarram National Mosque in the capital at 8 am. Then, another congregation followed at 9 am. A total of 5 congregations took place in the national mosque.

Due to the Coronavirus pandemic, the main traditional congregation of Eid was not held at the National Eidgah ground.

Muslim devotees took part in the munajat after the Eid prayers this time asking for divine mercy. In addition to wishing peace to the world and the Muslim Ummah, a special munajat was offered in the court of Allah to get free from Covid-19.

Eid-ul-Azha congregations were held in all the major mosques across the country in the morning.

The prayers were followed by sacrificing animals. Muslims traditionally mark Eid-ul-Azha or Feast of Sacrifice, by offering special prayers and slaughtering livestock, usually a goat, sheep, a cow or a camel, to commemorate Prophet Ibrahim's test of faith.

President Abdul Hamid on Wednesday offered the Eid-ul-Azha prayers at the Darbar Hall of Bangabhaban.
The Eid jamaat (congregation) was held in the morning with Pesh Imam of Bangabhaban Jame Mosque Mufti Maulana Saiful Kabir conducting the prayers, President's Press Secretary Joynal Abedin said.
He said a special munajat was offered seeking divine blessings for the continued peace and progress of Bangladesh.
The President offered the prayers with his family members and senior Bangabhaban officials.
The President usually offers Eid prayers at the National Eidgah ground. But the ground was shut due to the worsening Covid-19 situation.
The government had asked people to attend and celebrate Eid Jamaat in compliance with the health rules.

In mosques, a large number of people had masks on their faces. But, the number of people who did not wear masks was not less. However, devotees were not seen hugging after the prayers. Some exchanged Eid greetings by shaking hands only.

Law enforcement agencies, including the Rapid Action Battalion (Rab) and police, took tight security measures to enforce government rules and law and order.
Once the prayers were over, the common festive scenes of sacrificing animals were seen everywhere in the city.
Amid the concerns of Covid spread, well-off Muslims sacrificed animals in commemoration of Hazrat Ibrahim's devotion to Allah as illustrated by his readiness to give up his beloved son Hazrat Ismail.
Dhaka South City Corporation (DSCC) has formed 10 teams and set up a central control room to monitor the removal of sacrificial animal waste from July 21-24 while the Commerce Ministry formed three-phase committees for the management of rawhides of sacrificial animals.
Special meals are being served in hospitals, jails, government orphanages, centres for persons with disabilities, shelter homes and vagrant and destitute welfare centres, across the country.