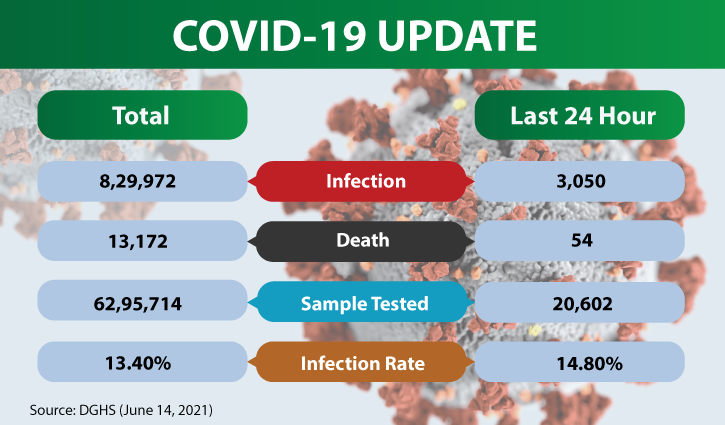 Amid the growing concern over the rapidly increasing cases and the higher transmissibility of Delta variant, Bangladesh registered 54 more deaths of coronavirus in 24 hours till Monday morning.

With the updated figures, the total fatality mounted to 13,172, Directorate General of Health Services (DGHS) said in a press statement this afternoon.

Besides, the health authorities detected 3,050 new cases in the same period taking the caseload to 8,29,972, the DGHS said.

The infection rate rose to 14.80 percent which was 12.99 percent on Sunday and 14.12 percent Saturday while the fatality rate rose to 1.59 percent.

number of infections and deaths is on the rise in different frontier districts amid fear expressed by experts that these districts will face a serious healthcare crisis as their hospitals are not equipped enough to face any worsening situation.

Some 20,602 samples were tested at 512 government authorised laboratories in the country at the same time and of them 3,050 were found positive for the virus, the DGHS said.

the deceased, 39 were male and 15 were female and 40 died at public hospitals, 10 at private hospitals and four at houses.

highest 14 people died in Chattogram division in the same period.

Apart from, the deadly virus claimed 13 lives each in Dhaka and Rajshahi, seven in Khulna, five in Rangpur, one each in Barishal and Mymensingh divisions.

Meanwhile, Worldometer, a reference website that provides counters and real-time statistics for diverse topics, has recorded 38, 20, 733 deaths so far caused by the virus and 17, 67, 71, 652 cases worldwide.

Bangladesh, earlier sought 2 million doses of AstraZeneca vaccine doses from the US for addressing Bangladesh's immediate needs but the US is yet to reply on that particular request.

China already delivered the second consignment of vaccine doses for Bangladesh as a gift of its government on Sunday.

Just nine days after the arrival of the first batch of 500,000 doses of gifted vaccine in Bangladesh, China announced the provision of the second batch of gift doses to Bangladesh.