"In government or opposition, wherever AL remains, its leaders and activists always stand beside the countrymen and work for them. During cyclone, flood or any other disaster, we always stay beside people and will continue assistance to people" she said.

The premier said this at a view exchange meeting on the review of recent flood situation in Sylhet Division and rehabilitation of the affected people at Sylhet Circuit house.

She said that during any disaster, AL reaches the affected people fast and quickly than others. "And, AL will continue its work for the people," she added.

Sheikh Hasina, also the President of AL, extended her gratitude to the local administration, army and leaders and activists of her party and its associate bodies who worked to rescue marooned people and distribute relief risking lives.

She said AL leaders and activists went to the remote areas, where many couldn't reach, and sent pictures of those areas to me what helped ease the rescue process.

"I sent those pictures to the army chief, our office, divisional office . . . so they have been able to rescue the people," the premier said.

Sylhet Divisional Commissioner and General Officer Commanding of Sylhet Cantonment made brief presentations on the flood and its damage.

Besides, over 300 medical teams are working to treat the flood victims while 1307 metric tones of foodstuffs alongside 24,000 packets of dry food and Taka 2.45 crore cash were distributed.

On the other hand, 74,000 hectors of land went under water while 40,000 ponds and hatcheries are damaged due to flood water which incurred a loss of estimated Taka 142 crore. 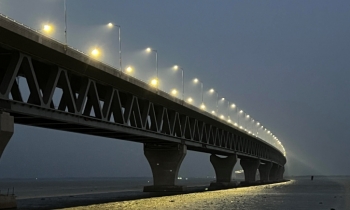