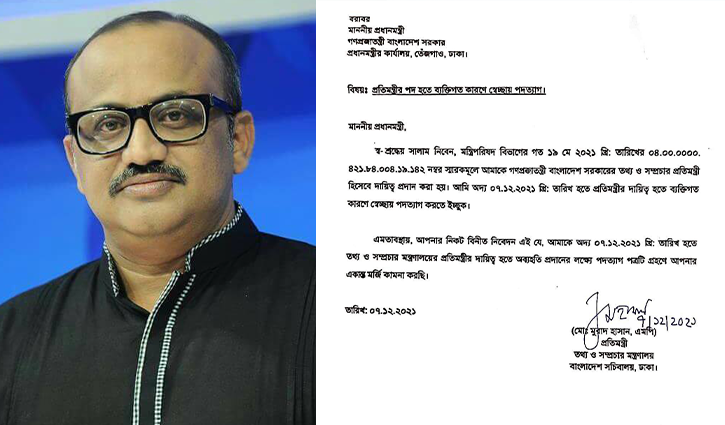 State Minister for Information and Broadcasting Md Murad Hassan has lost his job over his recent controversial remarks. He also lost post from the Jamalpur district unit of the ruling Awami League.

On Monday, Prime Minister Sheikh Hasina asked Murad Hassan to step down from his post by Tuesday.

In line with the PM’s instruction, Murad Hassan on Tuesday tendered resignation from his cabinet post over some controversial remarks he made during an interview on social media recently.

During the interview, he made derogatory remarks against BNP acting Chairman Tarique Rahman and his daughter Zaima Rahman.

Murad’s remarks went viral on social media and generated angers in the country’s rights groups, politicians and academicians alongside BNP leaders and activists.

Murad, in his resignation later, wrote that he is eager to resign from his post on personal ground.

The BNP, on Monday, demanded Murad Hassan apologise publicly and withdraw his “politically motivated, racial and derogatory” remarks against women and the Zia family.

After submitting resignation letter from his cabinet post, Murad Hassan apologised for his derogatory remarks.

Murad Hassan was stripped of his health and population affairs secretary post of Jamalpur district unit of Awami League.

The district unit of the ruling party made the decision during an emergency meeting on Tuesday.

Earlier, the High Court on Tuesday directed the Bangladesh Telecommunication Regulatory Commission (BTRC) to remove all indecent videos and audio contents of Murad Hassan from online and social media by 24 hours.

The HC bench of Justice M Enayetur Rahim and Justice Md Mostafizur Rahman on Tuesday issued the order on a suomuto move after Supreme Court lawyer Syed Sayedul Haque Suman prayed for necessary directives in this regard.