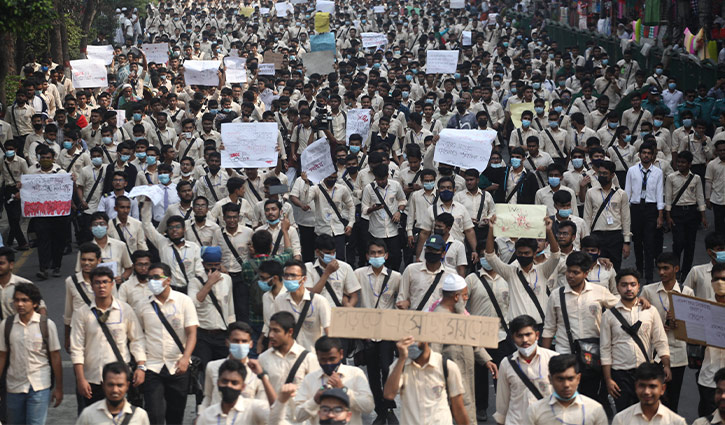 A huge number of students of Notre Dame College bring out a procession from the college campus and march towards Shapla Chattar intersection around 11am protesting their fellow Naim death in an accident. Photo: Business Insider Bangladesh

Thousands of students staged demonstrations at different places in the capital on Thursday to press demands for road safety and exemplary punishment of the driver responsible for the death of their fellow student in an accident.

Naim Hasan, a 17-year-old student of Notre Dame College was killed when a garbage truck of Dhaka South City Corporation (DSCC) hit him at Golchattar of the city’s Gulistan area on Wednesday.

Protesting the death, a number of students of Notre Dame College brought out a procession from the college campus and marched towards Shapla Chattar intersection around 11am.

Later, they staged a demonstration there around 11:30am blocking movement of all modes of vehicles on the road that caused a huge suffering to the commuters.

Besides, the students of Viqarunnisa Noon College also expressed their solidarity with the movement and staged a demonstration at Shantinagar intersection.

Meanwhile, students of Government Science College thronged Farmgate intersection around 11:30am and halted movement of vehicles.

They were seen chanting slogans pointing fingers at the administration that “we want justice, why my brother died?

The students took to the streets with six-point demands including safe road for all, implementation of the Road Transport Bill, 2018 that was passed by Parliament on September 19, 2018, keeping the provision of a maximum of 5 years jail or a fine of Tk 5 lakh or both for causing severe injuries to death of any person due to reckless driving.

They also asked the government to provide compensation to Naim’s family.

Last night, police arrested the man who was driving the dumpster carrier truck of the DSCC that ran over Naim.

The arrestee who was driving the truck is the assistant of the driver.