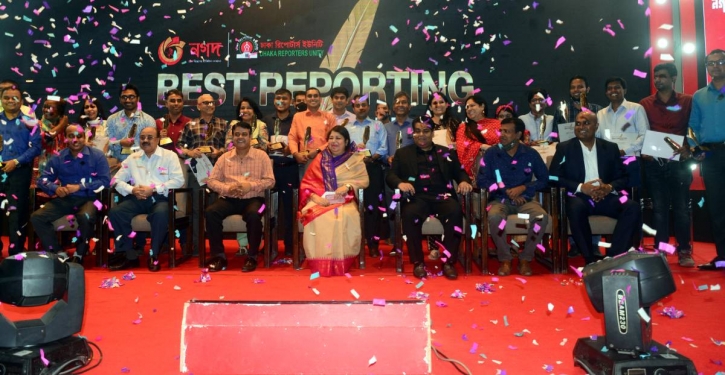 Nagad, the mobile financial service of the Postal Department, teamed up with the Dhaka Reporters’ Unity (DRU) to honour 22 reporters for their best reports for 2021.

Speaker of Jatiya Sangsad Shirin Sharmin Chaudhury handed over the awards to the best reporters at the Nagad-DRU Best Reporting Award 2021 ceremony at the Krishibid Institution Bangladesh auditorium in the capital as chief guest. Nagad Managing Director Tanvir A Mishuk was present as special guest.

Speaking at the function, Nagad Managing Director Tanvir A Mishuk said a good report brings to the fore many vital issues of the society and the country, which also serves as a tool for social change.

Tanvir A Mishuk said, “I sincerely believe that noted journalists like Manik Mia or Zahur Hossain Chowdhury will emerge from the list of reporters who have been recognised for their best reports today.”

Niaz Morshed Elite, executive director of Nagad, Shahjahan Sardar, chairman of the jury board of the Nagad-DRU Best Reporting Award 2021, Mosiur Rahman Khan, general secretary of the DRU, Mainul Hasan Sohel, convener of the awards committee, and former presidents and general secretaries of the DRU, also spoke on the occasion.

The reporters were awarded in the print-online media and the television-radio categories for the best reports in 13 and 9 subjects respectively. The country’s top 10 senior editors picked the 22 reports from the 242 reports submitted.