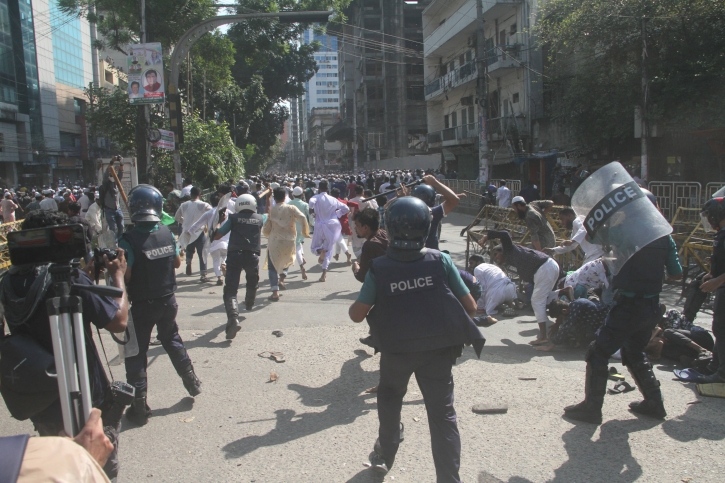 Two cases were filed over the Muslim hardliners’ clashes with law enforcers following Jummah prayers in Dhaka on Friday.

The clash occurred when protesters, agitated by an incident where a Quran was allegedly dishonoured at a Hindu temple in Cumilla, led a march from Baitul Mukarram Mosque and were blocked by police.

The cases, filed in the early hours of Saturday at the respective police stations, identified 21 suspects and accused at least 4,000 other unnamed individuals, police said.

Monirul Islam, chief of the Ramna Police Station, said ten people were arrested from the scene on Friday and law enforcers say they are working to identify the others involved.

The case at Ramna station named 10 people and accused nearly 1,500 other unnamed individuals, he said.

“On Saturday, a court granted us two days to question 10 arrestees, including Hasan, Habibur Rahman and Razzak, in our custody,” Monirul added.

The case with Paltan police names Khilafat Andolan leader Amir Jafrullah Khan and 10 others, while also accusing 2,000 – 2,500 other unnamed individuals.

“Amir Jafrullah and five others named in the case are still at large. We are working to arrest them and identify the suspects who were not named.”

The OC added that the arrestees had been remanded for a day.

Both police station chiefs said the cases were over obstructing government work and attacking police personnel.