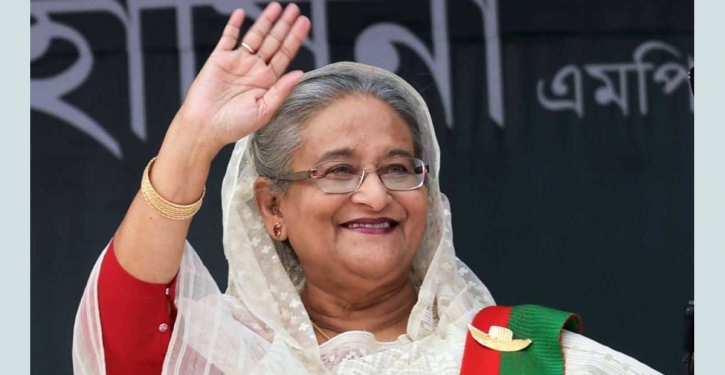 The 75th birthday of Prime Minister Sheikh Hasina, also the president of Bangladesh Awami League, is being observed today across the country.

Sheikh Hasina, the eldest among the five children of Father of the Nation Bangabandhu Sheikh Mujibur Rahman and Sheikh Fazilatunnesa Mujib, was born at Tungipara in Gopalganj on September 28, 1947.

Like previous years, the Awami League and its affiliated organisations will celebrate the day through various programmes, highlighting her life and achievements.

The prime minister is now in the USA as she went there to join the 76th session of the United Nations General Assembly (UNGA).

Marking her birthday, different programmes, including discussions, doa and milad-mahfil, special prayers and photo exhibitions will be organised in the capital and elsewhere across the country.

As part of the AL central programmes, a discussion meeting will be held at Bangabandhu International Conference Centre (BICC) in the capital at 10am on Tuesday.

Besides, doa and milad-mahfil will be arranged in Baitul Mukarram National Mosque and all other mosques throughout the country after Zuhr prayers.

Special prayers will also be offered at International Buddhist Monastery (Bihar) at Merul Badda at 6:30pm, Christian Association Bangladesh (CAB) Mirpur Baptist Church at 12:01am, Jakmala Rani Church at Tejgaon at 6am and Dhakeshwari Temple at 5pm on the day. The AL central leaders will be present at the programmes, said a press release.

The birthday celebration programmes will be held with maintaining proper health protocol across the country, it said.

AL general secretary Obaidul Quader also asked all the AL’s associate bodies, social and cultural organisations and their all-level leaders and activists to celebrate the day through different programmes including discussions, doa-mahfils and special prayers throughout the country.

He also asked the leaders of all AL units up to ward-level to celebrate the day, taking up similar programs maintaining the health codes.

Sheikh Hasina assumed the office on 7 January 2019 for the fourth time after her party Awami League-led grand alliance won the 11th Parliamentary election held on December 30, 2018.

Hasina spent much of her childhood in her ancestral small hamlet in Tungipara. When Bangabandhu was elected a legislator, his family moved to Dhaka in 1954. She graduated from the University of Dhaka in 1973.

Having a checkered political career, Hasina was elected vice president of the Students Union of the Government Intermediate Girls College when she contested as a candidate from Students League.

Later, she served as secretary and then as president of the college unit of Chatra League. She was also a member of Chatra League in Dhaka University and became the secretary of Rokeya Hall unit. She actively participated in all mass movements from her student life.

Bangabandhu Sheikh Mujibur Rahman along with the members of his family was brutally assassinated on the fateful night of August 15, 1975. Sheikh Hasina and her younger sister Sheikh Rehana were the only survivors as they were in West Germany at that time.

Hasina was unanimously elected as president of the Bangladesh Awami League in 1981 in her absence while she was in forced exile. She finally returned home on May 17, 1981 ending her six years in exile.

She faced the wrath of the then rulers on her return as she launched a movement to restore democracy in the country. Hasina was detained time and again, and at least 22 attempts were made on her life.