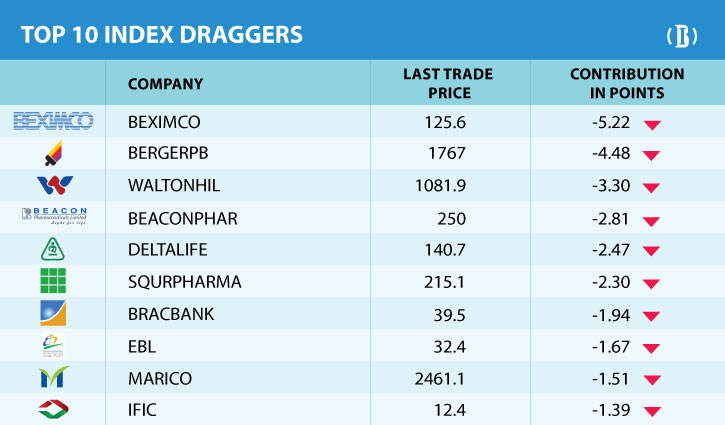 Contrary to fears that the capital market would bleed heavily from a record hike in fuel prices, the country’s bourses managed to end the day marginally lower, thanks to the two earlier moves taken by the market regulator.

After being upward for five consecutive working days, the price index fell slightly on both bourses of the country on Sunday.

Along with that, the share price of most of the companies participating in the transactions and turnover have also decreased.

Following the government’s announcement of a record price hike in fuel on Friday, market insiders feared the worst for the capital market.

On Friday night, the price of major types of fuel in the country was increased by Tk 34 to Tk 46 per litre. This has increased the cost of transportation and irrigation, and there is a fear of new pressure on the economy which is already under pressure from inflation.

However, the Dhaka and Chittagong Stock Exchanges (DSE and CSE) largely managed to absorb the negative impact of the price hike.

Stakeholders believe the capital market has overcome this shock due to the floor price fixed by the Bangladesh Securities and Exchange Commission (BSEC) and the investment limit or exposure limit issue of banks in the capital market.

However, there were glimpses of fear on Sunday morning. The index dropped by 24 points within four minutes of the start of trading, creating fears. However, five minutes later, after 51 points increased from there, the apprehension began to fade.

After that, the transaction continued through ups and downs throughout the day. The index closed slightly lower on later selling pressure.

However, even though the turnover has decreased, it has been more than thousands of crores of taka for four consecutive working days.

Shares of the 380 companies traded on the day, of which 124 firms gained, 187 issues lost and 69 companies remained unchanged.

The textile sector rose to the top position in terms of transactions. The total turnover in this sector was Tk 278.1 crore, which is 26.08 percent of the total turnover.

The pharmaceuticals and chemicals sector was at the second position with Tk 133.85 crore turnover, followed by miscellaneous sector at Tk 125.7 crore.

Shares of Beximco Limited were the most-traded by value on the DSE as its shares worth Tk 101.80 crore were traded on the day.

Meanwhile, the overall index CASPI of the Chittagong Stock Exchange (CSE) decreased over 5 points to 18,534 and securities worth Tk 21.72 crore were traded on the day.