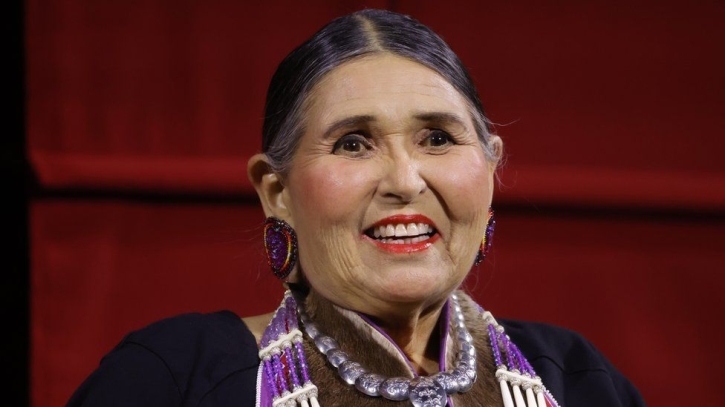 Sacheen Littlefeather, the Native American activist who declined Marlon Brando's Oscar for The Godfather on his behalf in 1973, has died aged 75.

The actress, who had breast cancer, died on Sunday, the Academy announced, reports BBC.

Her death comes two weeks after the organisation honoured her at a ceremony in Los Angeles, publicly apologising for her treatment at the Oscars.

Littlefeather, of Apache and Yaqui heritage, was booed while speaking on stage at the event 50 years ago.

Dressed in full Apache attire during the first Oscars to be televised around the world, the Californian, born Maria Cruz, explained on Brando's behalf that he would not accept his best actor gong for the mafia movie in order to protest against the treatment of Native Americans by the film industry and to bring attention to the Wounded Knee protests.

In 1973, several hundred locals, together with radical activists from the American Indian Movement (AIM), poured into the nearby village of Wounded Knee in South Dakota to protest government abuse.

The protest resulted in a violent stand-off with federal agents that went on for 71 days.

"I went up there, like a proud Indian woman with dignity, with courage, with grace, and with humility," she remembered at the recent event.

In a recent interview with Variety, she said she had made the Oscars speech in order to honour her ancestors and "native people everywhere".

"I was met with the stereotypical tomahawk chop, individuals who called at me, and I ignored all of them," she recalled. "I continued to walk straight ahead with a couple of armed guards beside me, and I held my head high and was proud to be the first Indigenous woman in the history of the Academy Awards to make that political statement.

"At that time in 1973, there was a media blackout on Wounded Knee and against the American Indian Movement that was occupying it," she went on. "Marlon had called them in advance and asked them to watch the Academy Awards, which they did.

"As they saw me, up on stage, refusing that Academy Award for the stereotypes within the film industry, and mentioning Wounded Knee in South Dakota, it would break the media boycott."

In 2020, Littlefeather told the BBC that straight after the speech she had to leave the stage with two security guards. But, she added, it "was a very good thing" as actor John Wayne was backstage. She said he was "furious with Marlon and furious with me" and wanted to pull her off stage himself.

Littlefeather featured in films like The Trial of Billy Jack, but said she returned to San Francisco after being blacklisted by the industry, to continue her activism and work in health care and the theatre.

In announcing her death online, the Academy quoted Littlefeather, the subject of the 2021 documentary, Sacheen Breaking the Silence, saying: "When I am gone, always be reminded that whenever you stand for your truth, you will be keeping my voice and the voices of our nations and our people alive."