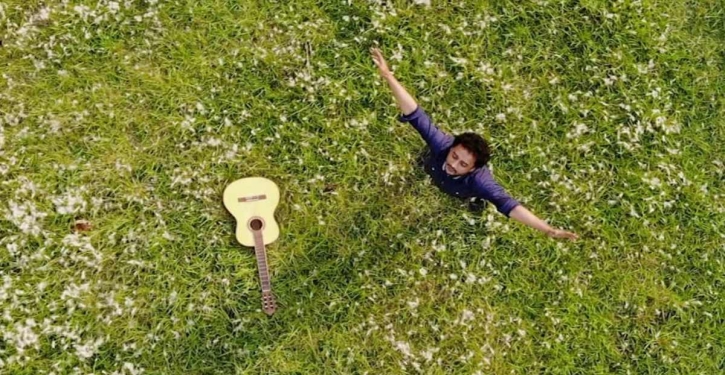 On the occasion of Sharadiya Durga Puja, a new song ‘Ajab Hawa’ by singer Souro, has been released under G Series.

Apart from giving voice, Souro also composed the tune and the lyrics are written by writer and artist, Dhruba Esh.

Music director Rezaul Karim Limon supervised the sound design and recording of this pop-rock track. Another popular music director of this time, Sajib Das did the mix mastering.

While dwelling on the song, musician Souro said, “‘Ajab Hawa’ is basically a song about rejoicing both the pain and joy of one’s life. When the darkness of depression descended on the whole world during the Covid period, we started working on ‘Ajab Hawa’”.

He said: “Just as humanity has come to a standstill in the fear of lockdowns and deadly diseases, nature’s renaissance has strangely surfaced. Nature begins to regain its vitality.”

‘Ajab Hawa’ is a song celebrating the immense joy of life while standing in that sad and pain-weary world.

According to the sources of the production company G Series, late lyricist and numerologist Kawsar Ahmed Chowdhury inspired the team most for the production of the music video of this song.

Nazmul Haque Bhuiyan Khaled, owner of the G Series, said the Sharidiya Durga Puja festival is one of millennia old cultural heritages of the Bengal.

“This is a universal festival that should not be seen as a mere religious ritual. It is also a sign of the creative cultural tradition of the Bangalis,” he added.

He believes that the listeners will like this song of realising the immense potential of life even in the most difficult times of life and global reality.