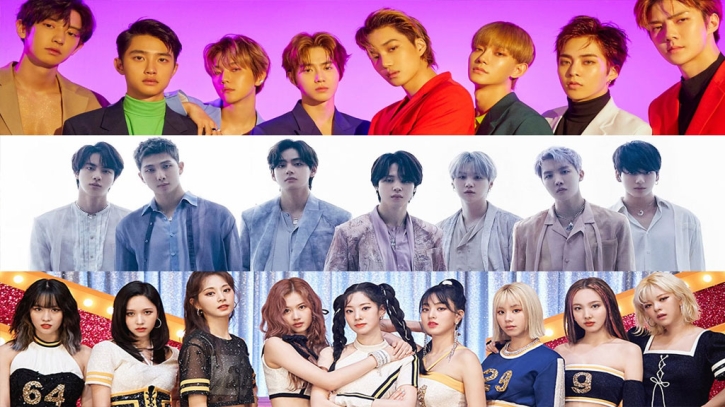 K-Pop stands for Korean Pop. A genre originating from South Korea has quickly become famous worldwide. Although K-Pop refers to Korean Pop, they are not only limited to pop culture. From Pop rock, jazz, hip-hop, and electronic dance to folk and classic, various genres are associated with it.

Let’s look at the list and find out whether your favourite K-Pop group has made it to the list.

The EXO group members are: Suho, Xiumin, Lay, Baekhyun, Chen, Chanyeol, D.O, Kai, and Sehun. EXO was formed by SM Entertainment in 2011 and debuted in April 2012.

The GOT7 band consists of members: Jay B, Mark, Jackson, Jinyoung, Youngjae, BamBam, and Yugyeom. They were formed in 2013 by JYP Entertainment.

Enhyphen is one of the hottest K-Pop groups in the world. Enhyphen consists of seven members: Heeseung, Jay, Jake, Sunghoon, Sunoo, Jungwon and Ni-ki. Since making their debut in 2020, they have won four ‘Rookie of the year’ awards and more recently emerged as the Best Artist at the Asia Artist awards 2021.

The group Red Velvet consists of five members: Irene, Seulgi, Joy, Wendy, and Yeri. They are managed by SM Entertainment.

SNSD, also known as Girls' Generation, is one of the most popular girl groups in South Korea. The girl group consists of eight members: Taeyeon, Sunny, Tiffany, Hyoyeon, Yuri, Sooyoung, Yoona, and Seohyun.

BigBang was formed in 2006. They have four band members: G-Dragon, T.O.P, Taeyang, and Daesung.

Stray Kids has eight members in their group: Bang Chan, Lee Know, Changbin, Hyunjin, Han, Felix, Seungmin, and IN. They were formed in 2017 and are managed by three labels: JYP, Epic Japan, Republic.