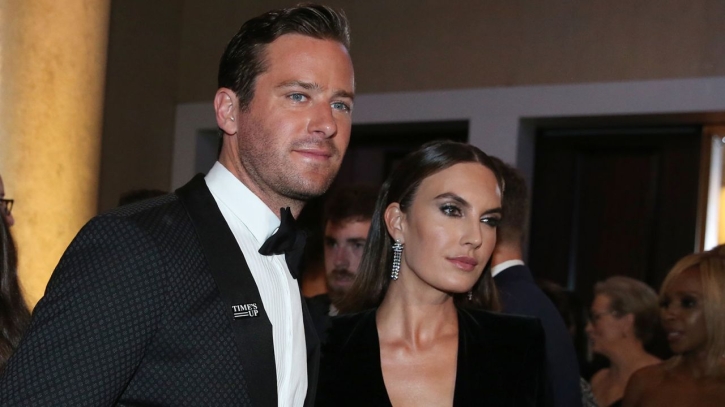 Armie Hammer and Elizabeth Chambers in 2018

Armie Hammer and his estranged wife Elizabeth Chambers’ contentious split in 2020 was widely publicized, but more is coming to light about why that may have been the case, reports CNN.

As the recent Discovery+ docuseries “House of Hammer” has brought allegations of sexual abuse by Hammer back into the headlines, CNN has obtained emails and text messages that allegedly show that Chambers, a business owner and TV personality, used a friend’s email account to contact media outlets about Hammer, both months before and after news of his extramarital affairs and the allegations of abuse by the actor, which he has denied, first became public. (Discovery+ and CNN share the same parent company.)

A now former friend of Chambers, who allowed Chambers access to her email account, provided emails and screen shots of text messages to CNN, which show that Hammer’s ex allegedly posed as this woman and sent messages to press outlets using her account. The woman, who has asked not to be named in CNN’s report, citing privacy for her family and children, said she is coming forward because she feels things “went too far” as she was trying to “support my friend while she was going through a difficult divorce.”

CNN has also obtained screenshots of text messages between Chambers and her former friend discussing the impersonation.

The woman told CNN that she would sometimes speak to reporters on the phone, while Chambers stood beside her and told her what to say, adding that she felt “pressure” to keep up the charade.

CNN has reached out to representatives of Chambers who declined to comment.

Hammer, who has appeared in films like “Call Me By Your Name” and “The Social Network,” and Chambers were married for 10 years. They share two children together. Chambers filed for divorce from the actor in July 2020, citing irreconcilable differences.

On October 15, 2020, according to screenshots of an email message viewed by CNN, Chambers contacted a media outlet using her friend’s name and account. In the email, she claimed that Hammer had abandoned her and their children in Grand Cayman where they were living together during the early months of the pandemic, before their separation, to spend time with actress Lily James. The email tip by Chambers was sent just weeks before Hammer and James’ movie “Rebecca” was set to debut on Netflix.

James’ representative has previously denied the allegation the two co-stars had an affair.

It’s unclear if any of the outlets used the information provided by Chambers, although they did repeatedly cover the former couple’s split and Hammer’s professional downfall.

Chambers publicly addressed the dissolution of their marriage for the first time in an interview with E! last week, stating the former couple is now in a “really great place” with their co-parenting and that their divorce is not yet finalized.

Her remarks sparked a response from one of the women who has accused the actor of abuse. That woman, identified only as Effie, first shared her story on Instagram on January 10, 2021 by creating an anonymous account called House of Effie.

Last Wednesday, Effie shared a series of messages on Instagram, allegedly between her and Chambers from that time, in which Chambers asked if she had retained a lawyer and seemed to encourage her to come forward with her account. The messages also show that she urged Effie seek legal representation, which she did with attorney Gloria Allred.

CNN has not been able to independently verify the messages, but in a statement to People, a representative of Chambers said: “Given the extent and nature of allegations that were made, Elizabeth sought to determine the veracity of those allegations. She was very sensitive to all parties involved. The safety and well-being of their children remains her priority.”

Two months after first sharing her allegations of abuse, Effie accused Hammer of raping her in 2017. She made the allegation during a press conference with Allred. Allred told CNN that as of last week, she is no longer representing Effie. She did not elaborate why.

CNN has reached out to Effie for comment and has not heard back.

Hammer has not been charged with any crime and has denied any wrongdoing. At the time, his attorney called the allegation “outrageous” and said Hammer’s interactions with the woman and other partners have been “completely consensual, discussed and agreed upon in advance.”

A spokesman for the LA County District Attorney’s Office told CNN earlier this month that the case remains under investigation. “A specially assigned prosecutor is working with law enforcement as they continue their investigation,” he said, adding that the evidence will be evaluated once it is submitted.

In images of emails obtained by CNN and dated January 13, 2021, allegedly writing under the guise of her friend, Chambers provided screenshots from Hammer’s private Instagram account to the same reporter she had previously contacted. In the correspondence, Chambers writes that Hammer had been photographed poolside, despite the allegations from women coming forward on social media, “smugly living his most privileged life as his career burns to the ground.”

Two days later, the outlet published a story about Hammer’s private Instagram account, though it is unclear whether the story was prompted by the emails.

In the texts and emails obtained by CNN, Chambers appears to acknowledge multiple times that she is impersonating her friend. In one screenshot of a text message sent from Chambers to her friend, she writes, “Omg. I’m currently writing an email from your account to the [media outlet].”

In Chambers’ interview this week, she said their whole family is now focused on healing.

“Armie has been focused on his healing. There’s the oxygen mask theory: You can’t really take care of someone until you are taken care of,” she said. “He has been very busy securing his own mask. My mask has been secured, [the kids’] masks are on, so right now it’s really been a lot about focusing on them, protecting them.”