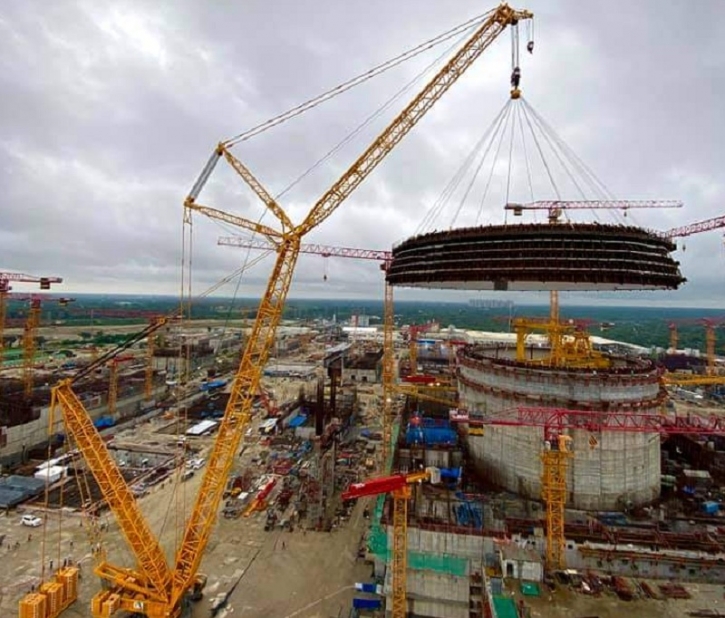 The 6th tier of the inner containment dome of the reactor building has been installed at the site of the under-construction Rooppur NPP power unit No 1.

Rosatom is the Russian state-owned nuclear agency that remained engaged as a contractor for the Rooppur NPP.

The large-sized metal structure of 44m diameter and 185t weight has been installed in its regular place on the cylindrical part of the reactor building containment at elevation +44.100, said Rosatom in a statement on Wednesday.

The operation was carried out by specialists of the Trest RosSEM branch in Bangladesh using a Liebherr heavy crawler crane of 1350t lifting capacity, it said.

A day before lifting, a special mounting beam of 15 steel cables had been installed.

“The first of the three tiers of the inner containment dome part has been assembled. The assembly took place as usual. The next stage of the work will be to mount the subsequent two tiers pre-assembled into one unit of the reactor dome containment, at the design level. As soon as both structures are welded together, we will start concreting the dome”, Aleksey Deriy, Vice President - ASE JSC Director for the Rooppur NPP construction project said.

Preparations for this operation took several months. The metal structures of three tiers of the reactor building dome were pre-assembled into 185t and 191t reinforced metal units on special slipways located in the immediate proximity of the power unit.

The Rooppur NPP site is located on the eastern bank of the Ganges River in the Pabna district at a distance of about 160 km northwest of the city of Dhaka.

The facility is designed and constructed by the Engineering Division of the ROSATOM State Corporation.

The nuclear power plant will consist of two VVER-1200 reactor power units, their life cycle is expected to be 60 years with the possible extension of the service life for another 20 years.