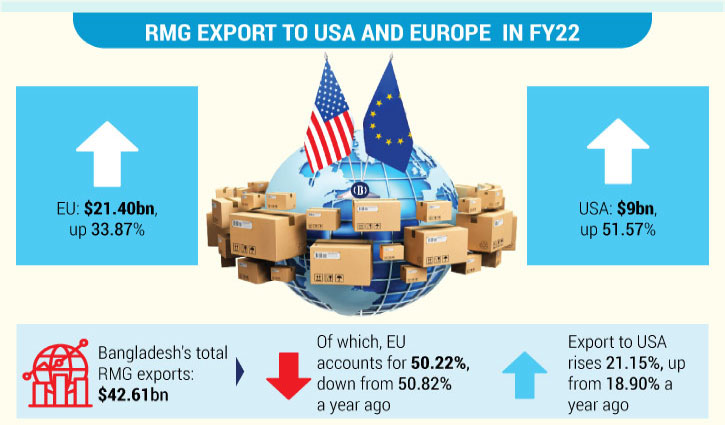 Bangladesh’s garment export to the US has been growing faster than other big markets thanks to the ongoing bitter trade relationship between the US and China.

Exporters shipped over a record $9 billion worth of apparel products to the US in the just-concluded fiscal year 2021-22 (FY22), up over 51 percent compared to the previous year, according to data released by the Export Promotion Bureau (EPB).

Industry insiders said this huge jump in RMG export to the US is a combination of two factors.

They agree that US buyers are preferring Bangladesh more as the source for their garment needs due to the ongoing Sino-US trade spat.

The other reason, they informed, is inflation in Europe, the other big market for Bangladeshi apparel. Exports to Europe have been dropping since the start of the Russia-Ukraine war which has caused high inflation in many European markets, and people are buying less.

However, Bangladeshi RMG exports are slowing down in Europe, it remains the biggest market for Bangladeshi apparel.

In FY22, Bangladesh exported garments worth $21.40 billion in the European Union markets, which was 50.22 percent of the country’s total RMG exports. It was 50.80 percent the previous fiscal year.

Recent export figures to Europe show a better picture of a significant slowdown.

Meanwhile, the US market had a 21.15 percent share of the Bangladeshi apparel market in FY22, growing from 18.90 percent in FY21.

“EU remains the biggest market for Bangladeshi garments but we have to expand our business in both traditional and new markets in this fast-changing world, Muhmmad Hatem, executive vice president of Bangladesh Knitwear Manufacturers and Exporters Association (BKMEA) told the Business Insider Bangladesh.

“Now we are eyeing other markets too. Besides, due to cold relations with China, the US has enhanced importing garments from Bangladesh. Relation between the two economic giants is getting even worse over the Russia-Ukraine war. Bangladesh might basket the advantages,” Hatem said.

In 2020, Bangladesh’s apparel export to the US market was recorded at $5.22 billion which jumped to $7.14 billion the next year even during the pandemic.

Further, Bangladesh is the top denim and trouser exporter to USA markets. In 2021 Bangladesh exported $798 million worth of blue denim and grabbed 21.82 of the US market.

Also, $2.56 billion worth of trousers were exported to the US in that year grabbing 22.15 percent of the market share, according to the Office of Textiles and Apparel (OTEXA) US.

“We have a strong relationship with the US buyers. The supply chain is also at a satisfactory level. Most of our giant companies have businesses with the US,” said Shahidullah Azim, vice president of BGMEA.