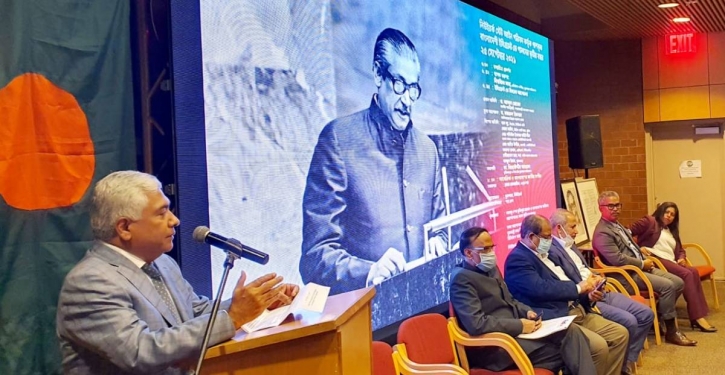 The FBCCI president made the remark at a discussion meeting organised on the occasion of ‘Bangladeshi Immigrant Day’ held in New York on Saturday.

Speaking as special guest, he said Bangabandhu Sheikh Mujibur Rahman, in his first historic speech in Bangla at the United Nations, called for building a peaceful new world by ensuring economic emancipation and social justice.

Through his prudent and far-sighted thinking, Bangabandhu set out to build Bangladesh’s political, economic, technical, and international trade relations with important countries of the world, Jashim said.

“During the three and a half years of Bangabandhu’s rule, Bangladesh became a member of the United Nations, UNCTAD, Commonwealth, OIC, IDB, and NAM. And through this, the architect of independent Bangladesh Sheikh Mujibur Rahman has laid a sustainable base for the economic and trade expansion of the country.”

The FBCCI president said while Bangabandhu was leading the nation towards fulfilling the dream of hunger and poverty-free Bangladesh through far-reaching planning and strong leadership, he was killed through the most brutal conspiracy in the history of the world.

“But in the realisation of Bangabandhu’s dream, his worthy daughter Honourable Prime Minister Sheikh Hasina is leading the country on the path of progress through his ideals, policies and path shown.

“Under the visionary leadership of Bangabandhu’s daughter, Bangladesh has qualified for the up-gradation from a least developed country to a developing country. Through digitisation, industrialization and human resource, and infrastructural development, Bangladesh is now one of the fastest-growing economies in the world.”

The New York State Legislature has decided to celebrate September 25 as ‘Bangladeshi Immigrant Day’ in honour of the historic speech delivered in Bangla at the United Nations on September 25, 1974, by Father of the Nation Bangabandhu Sheikh Mujibur Rahman.