60MW wind power project to come in production in June 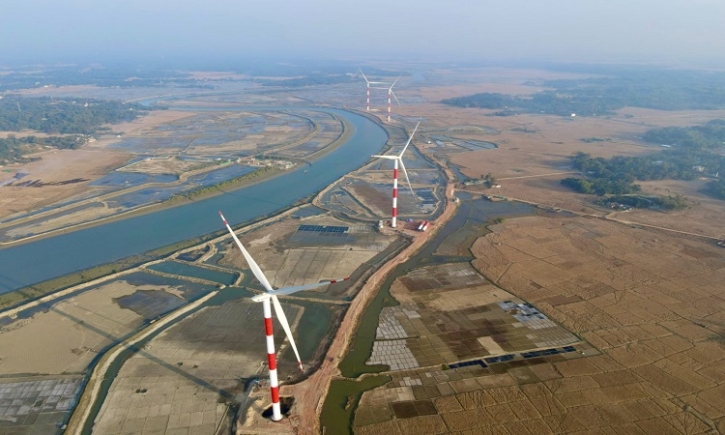 A 60-megawatt (MW) wind power project located in the Khurushkul area of Cox’s Bazar is scheduled to come into production in June, officials concerned said.

While visiting this correspondent last week at the project site, Manager (Project and Planning) Engineer Mukit Alam Khan said that as per an agreement, the state-owned Bangladesh Power Development Board (BPDB) will buy the electricity from Cox’s Bazar.

“A total of 22 turbines will be installed to generate 60 MW power from wind, of which each turbine will generate 3-MW electricity. Till today 10 turbines have already been installed,” he said.

Mukit Alam said that two turbines will be installed as standby for back up.

“We have submitted a proposal to the ministry of power, energy and mineral resources for enhancing generation capacity up to 120 MW, which will also require more 20 turbines,” he added.

“Renewable energy will play an important role in future power generation. The contribution of renewable energy in the energy mix of the country has been growing,” he said.

Nasrul Hamid, however, said more wind power plants will be set up in different locations of the country.

“Bangladesh is now enjoying 100% electrification due to the visionary and prudent leadership of Prime Minister Sheikh Hasina. We successfully reached power to all people from inaccessible hills to isolated char areas,” he said.

Earlier on 31 March, 2022, Nasrul Hamid had laid the foundation stone of the project. However, the Power Purchase Agreement (PPA) and Implementation Agreement (IA) were done on 15 May, 2014.

He said the modern power plant will generate 60MW of electricity, which will have scope to enhance generation capacity up to 200 MW.

As part of the government's integrated master plan for the power and energy sector, the Integrated Energy and Power Master Plan (IEPMP) are almost at its final stage.

The government started the Solar Home System (SHS) programmes to fulfill basic electricity requirement of the off-grid rural people of the country.

Up to January 2023, about 6.1 million SHSs have been installed under the programme in the remote areas where electrification through gird expansion is challenging and costly.

Thus the programmes have ensured supply of solar electricity to over 20 million people i.e. 12% of the country’s total population who previously used kerosene lamps for lighting purpose.