Matarbari plant to go for experimental generation in Dec 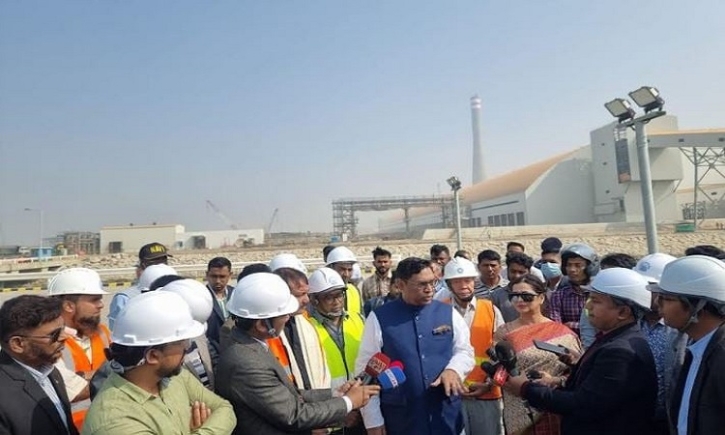 Matarbari power plant will go for an experimental electricity generation in December this year, State Minister for Power, Energy and Mineral Resources Nasrul Hamid has said.

“Initially one unit having 600 MW power generation capacity will go for the experimental operation in December and commercial commissioning will take place in January next year (2024),” he said while visiting the power plant and Single Point Mooring (SPM) on Thursday.

He said that another unit with 600 MW generation capacity will come into operation in June-July, 2024.

The state minister said the overall progress of the power plant rose to 75 percent, adding, "We hope that 1200 MW power will come from the plant in 2024."

He inspected construction work of the plant, port and SPM and gave instructions for completing those projects in time maintaining quality.

Seema Hamid, a social worker and wife of Nasrul Hamid accompanied the state minister during the visit.

According to the project details, Matarbari power plant constructed a jetty for unloading coal and silos to store coal for 60 days. The plant will need 13,104 tons coal per day for generating electricity.

Mother vessel with 80,000 tons coal will be able to anchor at the jetty, while only 1-2 days will be needed for unloading the coal from the vessel.

A 14.3 km long (300 m wide) channel was prepared to ease movement of mother vessel at the power jetty, while measures were taken to ensure navigability of the channel through sedimentation mitigation dyke.

A study showed that there was a potential of 8 million tons of sediment deposition per year. Authorities constructed two separate ash ponds for ash management properly.

The power plant is being built adjacent to the sea, which will not be affected by cyclone or tide, as a-14 meter above sea level embankment was constructed and the power plant is located inside the dam keeping in mind the highest tide in Bangladesh at a height of 10 meters. The 1991 cyclone caused a 7-meter high tide.

"We expect the first unit of 600 MW to be commissioned in December next year, and the second unit (600 MW) to come into commercial production 6 months later," he added.

The state minister said that there will be a land based LNG terminal as well as a LNG based power plant instead of coal.

"We have decided to build LNG terminal here to ensure energy security. Expert team has visited the site and the work will start soon. It will take about four years from the start of work," he said.

Earlier, a loan agreement was signed between the government and Japan International Cooperation Agency (JICA) on 16 June 2014. Under the deal, JICA will give Tk 43.921 crore as project support, while the remaining Tk 7.933 will be provided from the Bangladesh government and CPGCBL.

A consortium of Japan's Sumitomo Corporation, Toshiba Corporation and IHI Corporation has been working as the EPC contractor for the Matarbari 1200 MW ultra-super critical coal-based power plant project.