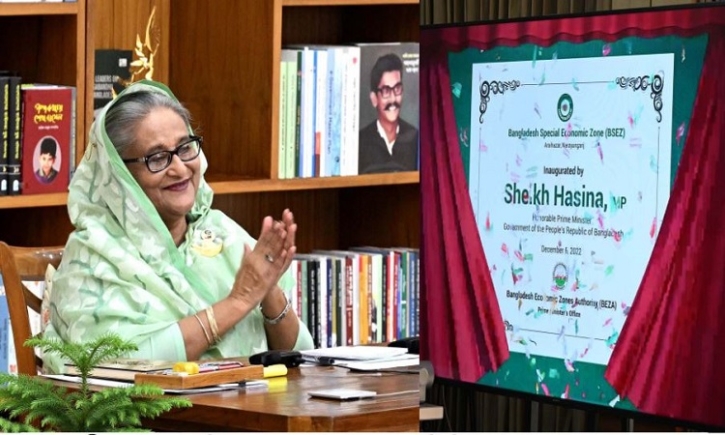 According to Bangladesh Economic Zones Authority (BEZA), the Japanese Economic Zone would draw USD 1.5 billion investment and create more than one lakh jobs. Forty foreign companies, including 30 Japanese, have expressed interest to invest there, BEZA said.

Noting that an excellent investment climate prevails in Bangladesh, PM Hasina said, “I think Bangladesh is the most attractive destination for investment. We are offering the highest (investment) opportunities and facilities.”

Sheikh Hasina said her government has been working for the overall development of the nation through planned industrialization, while protecting arable land and the environment.

The PM said foreign entrepreneurs are also expressing interest to make investments in the country.

“In terms of geographic location, Bangladesh is perfectly positioned to be a bridge between the East and the West,” she said.

Sheikh Hasina said her government has been strengthening connectivity with South Asia and Southeast Asia – two most densely populated regions with a large market of 300 crore people.

Besides, the government has increased the purchasing power of people – a market of 17 crore people, she added.

The PM said the government is also offering special facilities for young entrepreneurs so that they can make investments in the economic zones. She opened the commercial operation of the Japanese Economic Zone, being developed on 1000 acres of land under the joint venture of Bangladesh and Japan.

Executive Chairman of BEZA, Shaikh Yusuf Harun, in his welcome speech, said the inauguration of Bangladesh Special Economic Zone would open a new era for attracting Japanese and other foreign investments to Bangladesh.

He said Singer, a renowned company, has already started the construction of its factory in the economic zone.

Harun also said two Japanese companies were going to sign agreements after the opening ceremony to set up their factories in the economic zone. Japanese Ambassador to Bangladesh Ito Naoki and President of Sumitomo Corporation Masayuki Hyodo also spoke on the occasion.

BEZA and Japan’s Sumitomo Corporation are jointly working to develop the economic zone. The process of the joint venture started with Prime Minister Sheikh Hasina’s visit to Japan in 2014.