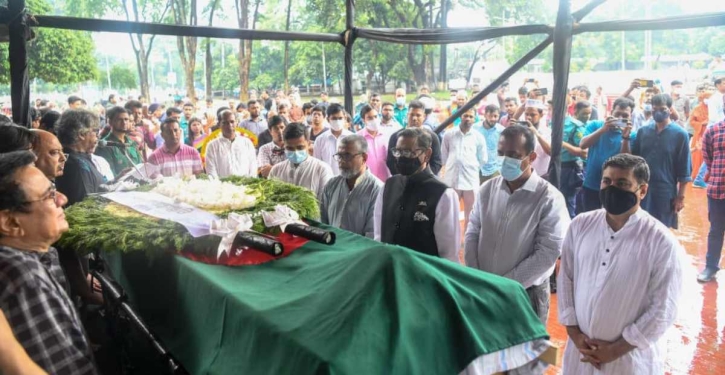 People from all walks of life paid their last respects to veteran journalist Toab Khan, who died at a hospital on Saturday, at the Central Shaheed Minar in the city on Monday.

His first namaz-e-janaza of Khan was held at Dainik Bangla office in the morning and from where his body was taken to the Central Shaheed Minar around 11:30am. His body was kept there until 12pm where people paid tributes.

Later, the coffin of Khan was taken to the Jatiya Press Club around 1pm where his second-namaz-e-janaza was held.

Journalists paid homage by placing floral wreaths at his coffin.

His third namaz-e-janaza was held at Gulshan Azad Mosque after Asr prayers and he was buried at Banani graveyard.

Khan, an Ekushey Padak recipient, breathed his last in United Hospital on Saturday at the age of 87.

Khan started his journalism career in 1953 and joined Dainik Songbad in 1955.

He was also the first Editor of ‘Dainik Bangla’ which changed its name from ‘Dainik Pakistan’ after Bangladesh’s independence in 1971.

He became the editor of ‘Dainik Bangla’ on January 14, 1972. He also served as the Press Secretary of Bangabandhu Sheikh Mujibur Rahman in 1973-75.

The veteran journalist also played a role as a strong voice in Swadhin Bangla Betar Kendra to inspire the freedom fighters during the War of Liberation.

He also served as the advisory editor of daily ‘Janakantha’ and later joined as the editor of ‘Danik Bangla’.