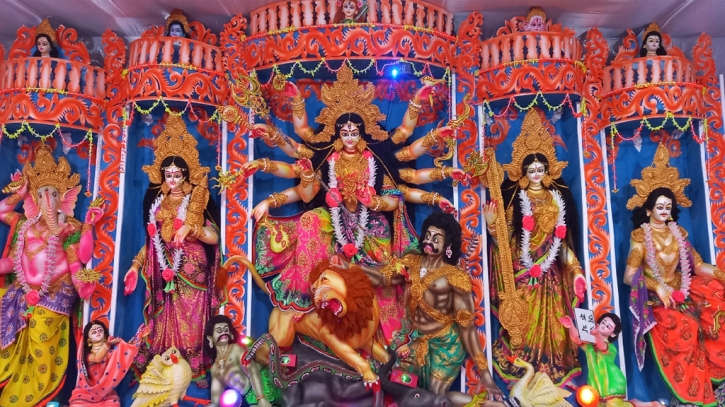 Durga Puja, the biggest religious festival of the Hindu community, is beginning today (Saturday) with the incarnation (Bodhon) of goddess Durga at temples across the country, marking Sasthi, the sixth day of the lunar month.

The five-day puja will come to an end with the immersion of idols of goddess Durga in rivers and other water bodies on October 5.

All the preparations have been taken for celebrating the religious festival smoothly with tight security is in place at every puja mandap in the country.

The Maha Saptami puja will be held on Sunday while Maha Ashtami, Kumari Puja and Sandhi Puja on Monday, Maha Nabami puja on Tuesday and Bijoya Dashami will be held on Wednesday.

Recitation of the verses from the Holy Chandi and blowing of conch shells (Shankha) and beating of drums will be heard in temples and pandals in the city and elsewhere throughout the day.

The Mahalaya, the auspicious occasion heralding the advent of goddess Durga, was celebrated on September 25th.

Besides, the Puja Mandaps, where there are no CCTV cameras, will be kept under surveillance by police and Ansar members for 24 hours.

President Abdul Hamid and Prime Minister Sheikh Hasina have issued separate messages greeting the members of the country’s Hindu community on this occasion.

In his message, President Hamid said the main religious festival of the Bengali Hindu community is Durga Puja. The country’s Hindu community has been celebrating the puja amid huge enthusiasm and festivity with different rituals since ancient times.

Durga Puja is not only a religious festival, but also a social one, he added.

“Communal harmony is the eternal tradition of Bengalis. This tradition must be carried forward in our overall progress together,” he urged all.

In her message, PM Hasina said Durga Puja is not only a festival of the Hindu community, it is now a universal festival. Destruction of evil forces and worship of truth and beauty are the main motives of Sharadiya Durgotsob.

“On the occasion of Durga Puja, I wish peace, welfare and prosperity to all citizens including the Hindus,” she said.

Durga Puja will be held at 32,168 mandaps (pandals) across the country, including 241 in the capital city, this year.