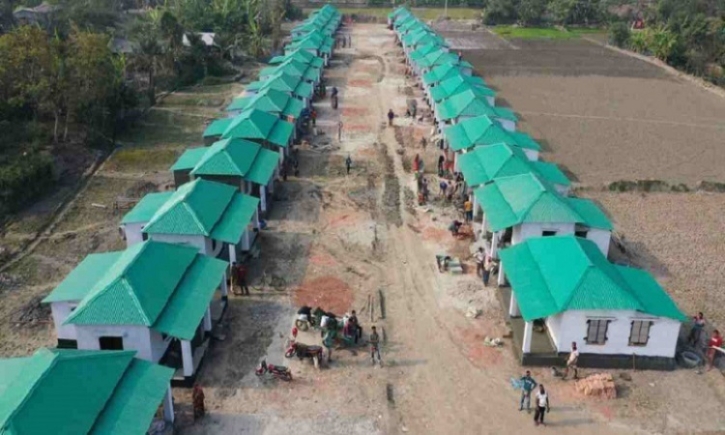 Prime Minister Sheikh Hasina wants to make sure that everyone in Bangladesh gets own home, land and address as her government continues efforts for inclusive development.

“My aim is to see that not a single person remains homeless, landless and without an address in Bangladesh,” she told Bengali service of Voice of America (VoA) in an interview aired on Tuesday.

During the interview, she also shared how the idea of Ashrayan project came to her mind giving an equal ownership right to both husband and wife of a family.

The Ashrayan project - home for landless and homeless – is seen as a “Sheikh Hasina Model” for inclusive development.

Responding to a question, PM Hasina said she is almost done with her aim and 10 lakh families have been given homes. “If we count, around 35 lakh people got the shelters.”

She said they are not just giving the homeless people homes, the people are also provided with cash support with necessary training to get involved in income generating works and opportunities to sell their products in the market. “These make their living sustainable.”

The prime minister remembered her countrywide visits in 1981 when she helped people get homes in some places. But she saw that those homes were sold out by them after a few days.

Then she thought of some ways so that the helpless people do not need to sell their homes.

PM Hasina also shared her experience in visiting St. Martin's Island after a cyclone in 1997 where she found 70 families without homes.

Awami League leaders came forward with their land when she wanted to build homes for them with the support of the Bangladesh Navy. “I designed the house. That’s how it began.”

The prime minister said she made sure that ownership of the home for the homeless goes equally to husband and wife.

If any problem arises anytime between them, the ownership will go to the wife, she said.