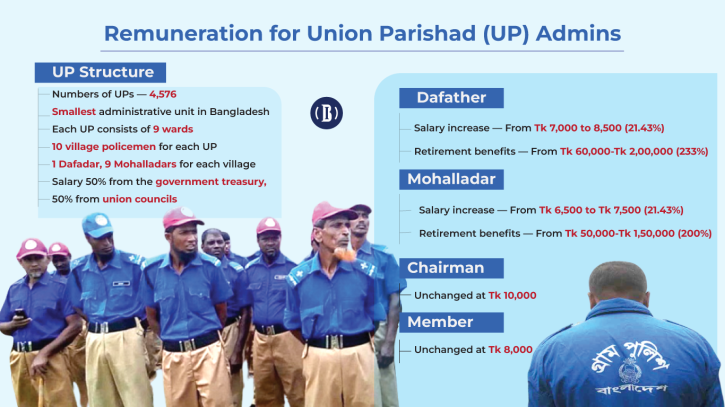 The government has hiked salaries and allowances of the public employees serving as Union Parishad village policemen (Dafathers and Mohalladars) by 15 to 233 percent after five years. However, the honorariums of Union Parishad chairman and members are remaining the same.

Currently, Bangladesh has a total of 4,576 Union Parishads, the smallest administrative unit in the country. There are 10 village policemen working under each union parishad. Among them, one ranked as Dafadar and nine as Mohalladars. Each Union Parishad consists of 9 wards.

The village policemen will get 50 percent of their salaries from the government treasury while the rest from their respective union councils.

However, many Union Parishads are unable to pay their portion of police’ salaries and allowances on time. As a result, many times that salary and allowances are being paid from a fund created to submit lease money of upazila parishad's haats and bazaars.

A Deputy Secretary of Local Government Department (UP-2), Akbar Hassan, said, as the UP cannot pay the village police’ salaries on time, their inclusion in the national pay scale is being discussed. Incorporating them into the national pay scale depends on a case now awaiting verdict. But there is no problem to increase their salaries, officials said.

Molladars guard the Union Parishads regularly at some designated areas. If necessary, they keep vigil during the night.

These policemen distribute the responsibilities of subordinate Mohalladars and supervise their activities. They maintain a notebook provided by the Upazila Nirbahi Officer and record the information in the prescribed manner. Dafadars are responsible for ensuring security in the entire union area day and night.

It has been suggested in the District Commissioners Conference that necessary initiatives should be taken to increase the honorarium of the Union Parishad Chairman and members by enhancing the local government's own revenue.